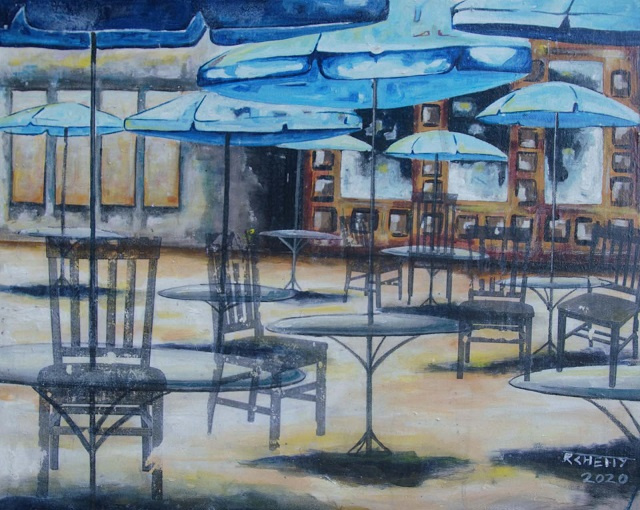 Some of the artworks were in response to COVID whereas others were quite different. (Ryan Chetty/Lockdown Biennale)

Originally planned to have been the next edition of the Byenal Sesel – Creole for Seychelles Biennale – in April 2020, the exhibition is going online due to the COVID-19 pandemic outbreak.

The theme -- picked before the pandemic but one that resonates strongly today -- is "Lost and Found."

The chairperson of the arts council as well as one of the exhibition's curators, Martin Kennedy, said at the launch that he and his team were worried that they would lose traction with a very long delay between where NAC was last February and when a physical exhibition could realistically be staged.

"This is when we decided to have a Lockdown Biennale. We realised that the 40-plus artists would have spent lockdown time in most cases making art, and they were. Some were in response to COVID whereas others were quite different," said Kennedy.

Artists were consulted about the idea of sharing work that they had been doing with the council so that the later could organise an online exhibition. Though a few declined for personal reasons, everyone was ready to share their work, not only with Seychelles but with the world.

"The amazing thing is that despite this rather difficult time, we have managed to maintain momentum and keep our artists committed and interested in our biennale," he continued.

Even if at the start of 2020 no one was thinking that COVID-19 would become a global problem, the curators together with the council's committee chose 'Lost and Found' as the theme for Byenal Sesel.

"Who would have thought that we would have chosen a theme which has such significance in the light of what has happened. Because of the pandemic, we have lost much of our normal accepted way of life and now we are in the process of finding it again, and in so doing, finding ourselves again - artistically, socially and economically. 'Lost and found' turned out to be a rather unintentional and significant theme," said Kennedy.

He added that the council is already eyeing a physical exhibition expected to take place next year in July.

The virtual exhibition brings together 19 different countries from Europe, Africa, Asia and Northern America. The chief executive of the National Arts Council (NAC), Jimmy Savy, said that the council is proud that "our local artists are ready to rub shoulders with big names such as Yoko Ono, a Japanese artist, and Maria Wolfram from Finland."

"The National Arts Council really values the local artists, are proud of them and know that they can measure up to international artists. We thank you all for participating," added Savy.

Talking about his art piece in the Lockdown Biennale, Barry Gertrude, said that "at times when I look at my previous works, I feel the piece calling out to me to change its meaning and add more to it."

"I am someone who likes taking something from one context and placing it in another. While walking around, I have noticed that there is a wild species of bitter gourd that is invading fields and walls in Seychelles and it somehow reminded me of COVID. If we let anything invade our environment, it will also become a problem," said Gertrude.

He added that "having a virtual exhibition keeps our minds moving and keeps us on the scene, reminding people that we exist."

Together with the launch of the online exhibition, a third catalogue was also revealed.

"When the Biennale project started pre-COVID, nobody envisioned that we would be doing a virtual exhibition and a third catalogue - a new one that would precede the two which were always planned to coincide with the physical exhibition," said Kennedy.

The first catalogue was to be published to coincide with the beginning of Byenal Sesel. It was going to feature the artists, talk about their practice and show preliminary drawings and photographs of maquette and plans as well as images of previous work. The second one was going to be put together within a 10-day period and was intended to record the work actually being shown in the biennale.

NAC decided to have another catalogue that would come before either of those.  It contains a hundred pages of nicely illustrated work of the participants in the Lockdown Biennale.