Extension of Seychelles' La Gogue dam expected to be completed by end of year, official says 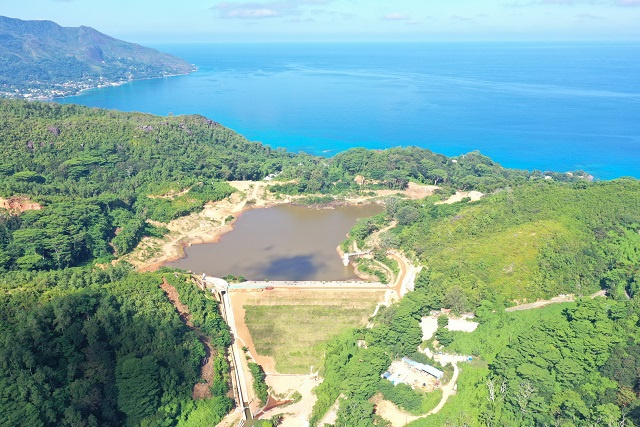 Tthe project is now expected to be completed by the end of this year, two years behind schedule. (Public Utilities Corporation)

(Seychelles News Agency) - The ongoing extension project at the La Gogue dam is 95 percent complete, with additional work to be undertaken to deal with seepage and excess rainwater, said an official of the Public Utilities Corporation (PUC).

Work to expand the capacity of the La Gogue dam by 600,000 cubic metres started in January 2018 and because of several delays, the project is now expected to be completed by the end of this year, two years behind schedule.

The project manager at PUC, Erna Victor, told the press on Friday that “at the moment the biggest delay that we are experiencing is for us to start additional work… There are certain works that need to be done at the right abutment, where our spillway is located as well as at our South saddle dam, the part of the dam that faces Glacis.”

She outlined that following investigations carried out on the soil in these areas, it was observed that there were problems preventing grouting from being effective. Consequently, the PUC started looking at alternative solutions so as to control seepage.

“On the right abutment, we will be doing some pilling where we will be drilling to place some concrete pillars. These pillars will reach a maximum depth of 45 metres and this will only be for the right region of the embankment, and between our new and old spillway. There are also some additional works to be done on the south saddle dam facing Glacis,” said Victor.

Work will be done on the inside of the reservoir to install a PVC membrane. On the slope that faces the houses located below the dam, two drains will be built so as to collect rainwater that flows on the slope and direct it towards the river located lower down.

Victor explained that failure to do these works could result in the houses being affected should the slope fail.

“At the moment we are still finalising some technical details for the additional works that need to be done,” said Victor.

The project was first delayed in 2018 when truckers protested for not being involved in the works.

“We also experienced delays due to COVID-19 as there were experts that were expected to come and install our PVC membrane at our main embankment that would have helped to control seepage. These experts were unable to come into the country because at the time there were restrictions on travelling into the country,” added Victor.

On the project’s cost, Victor said that “the contractor is not paid for the delays. They, however, get an extension on time to complete certain works. For the project itself, the cost has reached SCR 174 million ($8.2 million) which is about 10 million under the amount set by the contract.”

Once the dam becomes operational, work will shift to the second component of the project which is the construction of a new water treatment plant with a capacity to treat 4,400 cubic metres of water per day.

It will be the fourth treatment plant after Hermitage, Le Niole and Cascade which distributes potable water on Mahe – the main island of the 115 islands archipelago in the western Indian Ocean.

Water scarcity, a worldwide phenomenon, is not uncommon in Seychelles, with a population of 98,000. It is more evident during the dry season when the southeast trade winds kick in, from May till September.