WHO experts say Covid probably came to humans from animals 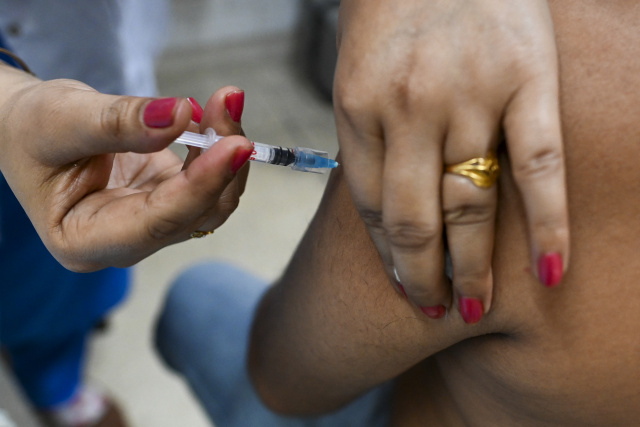 A medical worker inoculates a man with the Covaxin Covid-19 coronavirus vaccine at a health centre in New Delhi on March 25, 2021, as India recorded more than 50,000 new coronavirus cases for the first time since November while a new wave of infections takes hold a year after one of the world's tightest Covid-19 lockdowns was imposed. (Sajjad HUSSAIN / AFP)

(AFP) - A team of international experts will present details Tuesday of their findings from a mission to China, which concluded Covid-19 probably passed to humans from a bat via an intermediary animal, all but ruling out a laboratory leak.

But the report, drafted by World Health Organization-appointed international experts and their Chinese counterparts, offers no definitive answers on how the new coronavirus jumped to humans.

AFP obtained a copy of the final report ahead of its official publication on Tuesday.

WHO director-general Tedros Adhanom Ghebreyesus said the international experts would hold a press conference Tuesday at 1400 GMT to discuss their findings, adding that all hypotheses on the pandemic's origins remained open and needed further study.

Covid-19 has killed more than 2.7 million people worldwide in the 15 months since it emerged, forcing governments around the world to introduce restrictions that have battered the global economy.

Ahead of a meeting with world leaders, UN chief Antonio Guterres called Monday for more debt relief for the poorest countries struggling with economic fallout from the pandemic.

In the United States, there was good news about progress of its vaccine roll-out, but President Joe Biden warned Americans the battle was far from over.

Mexico, meanwhile, released new figures on excess deaths that suggest its official coronavirus death toll -- already the third-highest in the world -- is a massive underestimate.

The expert report on the origins of Covid-19 has had a troubled birth, with publication delays adding to the hold-ups and diplomatic wrangling that plagued the WHO's attempts to get experts into Wuhan -- the city at the center of the initial outbreak.

They finally arrived on January 14, more than a year after the first cases surfaced.

The report authors judged that the most likely scenario was that it had made a direct leap to humans, while not ruling out other theories.

Beijing's theory that the virus did not originate in China at all but was imported in frozen food was judged "possible" but very unlikely.

Claims promoted by former US president Donald Trump's administration that the virus escaped from a research lab were judged "extremely unlikely."

Addressing an online forum that included dozens of world leaders, he said the pandemic has pushed the world to "the verge of a debt crisis" and required "urgent action."

"We need to change the rules," he argued.

The pandemic had also "shattered the lives" of millions of women and girls and reversed progress towards gender equality, he said.

In the US, the White House said that 90 percent of adults would be eligible for Covid-19 shots within three weeks.

But in a television address, Biden warned the country -- which has the world's highest death toll -- that "our work is far from over. The war against Covid-19 is far from won."

He condemned the reckless behavior of some people flouting social distancing measures.

New government data from Mexico showed that it had registered 294,287 Covid-19 deaths -- substantially more than previously recorded, and the third-highest in the world behind Brazil and the United States.

In Britain on Monday, people rushed to pools and parks to enjoy new-found freedoms, as the government allowed small groups to gather and sports activities to resume.

"We haven't swum since January 5, so we were beyond excited to come back and get back into the water," said swimmer Jessica Walker a London pool.

The country is also lining up an FA Cup semi-final football match in April as a test run for reopening large events.

Johnson & Johnson announced a deal with the African Vaccine Acquisition Trust (AVAT) to bring relief to that continent.

AVAT has an initial deal for 220 million doses of the single-shot vaccine with J&J subsidiary Janssen Pharmaceutica for delivery from the third quarter of this year.

With EU approval already in its pocket, the US drugmaker also plans to begin European deliveries on April 19.

The bloc has lagged far behind Britain in its vaccine rollout.

Rising case numbers in Germany led Chancellor Angela Merkel to lambast the heads of the country's regional states, including her own party colleagues, for failing to reintroduce restrictions.

In neighboring France, President Emmanuel Macron may announce new measures this week after partial regional shutdowns failed to keep the number of people in intensive care below its second-wave peak.

Meanwhile, leaders from 23 countries including Merkel and Macron, the EU and WHO backed a push for a new global treaty to better prepare the world to tackle future pandemics.

And the makers of the Russian-developed Sputnik V vaccine struck a deal with a Chinese firm to make more than 60 million doses, citing "rising demand" for the drug.