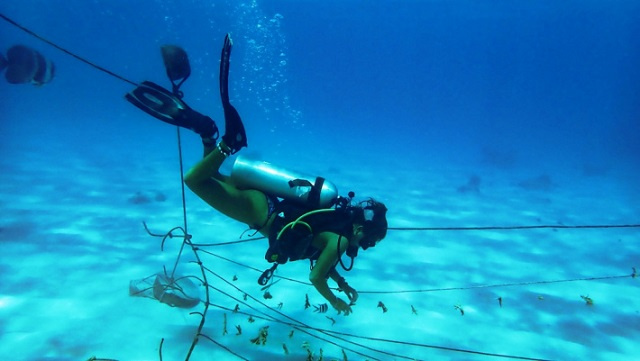 Through the project, the society is increasing its efforts to restore coral that have been damaged by coral bleaching events in the marine park, which is managed by the Seychelles National Park Authority.

MCSS is a local non-governmental organisation established in 1997 which promotes conservation of marine and coastal ecosystems through scientific, management, educational and active conservation programmes.

Funded by the Adaptation Fund and administered by UNDP, the project is part of a bigger regional one called 'The Restoring Marine Ecosystem by Restoring Coral Reefs to Meet a Changing Climate Future.' The six-year project which is being undertaken in Seychelles and Mauritius has a total cost of $2.5 million.

The project leader, Leo Barret, told SNA on Tuesday that the aim is to rehabilitate the reef, restoring its natural function.

"We want to bring back the coral reef ecosystem within the Ste Anne Marine Park to a healthy status so as to bring back some of its services such as increasing habitats for fish, increase resilience to climate change and limiting coastal erosion," said Barret.

He explained that the team of four is using a method called coral gardening also known as asexual coral propagation. The coral gardening method uses fragments of coral from donor colonies or wild populations.

"We have specific sites where we know there are coral that have already survived coral bleaching. On these sites, we do some research to find the right corals and we put them in the nurseries," added Barret.

The collected fragments are transported to a nursery where they are grown for around nine to 12 months. At this point, the coral requires constant monitoring, maintenance and cleaning to prevent algae from settling, and competing with or killing the coral fragments while they are small and vulnerable.

At the moment, MCSS has six nurseries holding approximately 3,000 corals in total. Two are located in the Ste Anne Marine National Park, three near Cerf Island and another, the most recent one, near Moyenne Island.

During the six-year project, MCSS will be restoring 0.5 hectares of degraded coral reef with 12,000 coral colonies. The implementation of coral gardening method is being done in the Ste Anne Marine National Park since 2015 and 5,800 corals have been produced.

Around 20 minutes by boat from the main island, Mahe, Ste Anne is one of the most well known natural destinations and was declared a marine park in 1973, the first in the western Indian Ocean.

The National Park is a shared and important resource for many locals and as such, MCSS has launched its first stakeholder consultation in the interest of transparency, raising awareness and increased stakeholder engagement.

"Many Seychellois are users of the marine park or can be one, and we would like to make sure that everyone is aware that we are working on this project and everyone will be able to give their advice," said Barret.

To achieve this MCSS has created a website dedicated to the project and has developed an online questionnaire that is being used to obtain the input and feedback of stakeholders.