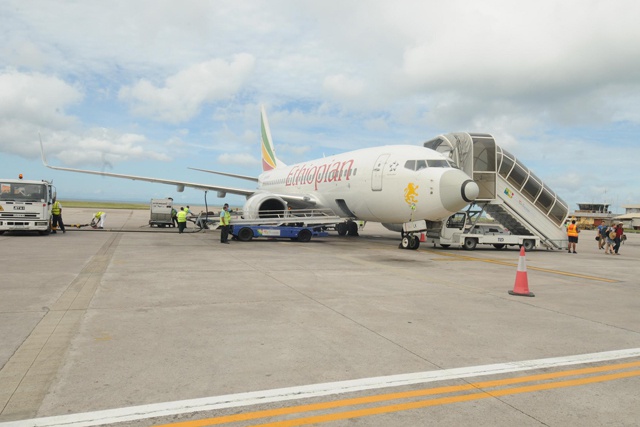 (Seychelles News Agency) - Ethiopian Airlines, which had operated three weekly flights to Seychelles from its hub in Addis Ababa for just over a year, before withdrawing on March 1, 2014 resumed services to the Indian Ocean archipelago today, when 83 passengers disembarked from aboard a Boeing 737.

The Ethiopian Airlines flight landed at the Seychelles international airport at Pointe Larue, eastern coast district of the main island of Mahé at around 3pm local time.

The majority of the passengers were Chinese nationals followed by Europeans.

Ethiopian Airlines is after Kenya Airways, only the second African carrier with flight links to Seychelles offering their international passengers onward connections to Mahé.

The Seychelles Tourism Minister Alain St Ange, present at the airport this afternoon said Seychelles tourism depends on air access. He noted that recent months has seen the return of two airlines, Air Austral from Reunion and now Ethiopian Airlines.

"This is an indication of confidence in Seychelles as a holiday destination, for Seychelles it’s a good sign as all direct flights bring in a new market," said St Ange.

He told the press that the new flights connect with arrivals from China and Paris, which means there is a fairly short waiting time for transit passengers from the two markets.

It is hoped that this will further boost arrival from Chinese market as well increase visitors from the French Market which this year has seen a 13 percent drop compared to last year.

The Chief Executive Officer of the Seychelles Civil Aviation Authority (SCAA) Gilbert Faure told SNA that initially the airline will operate three weekly flights and that the passenger load will be monitored to decide on future services.

The Ethiopian Airlines flight was originally scheduled for yesterday but it was postponed by a day.

St Ange said this was due to five groups of Chinese passengers who were to travel on that flight cancelling at the last minute because of the Ebola epidemic scare.

It is to be noted that the Ebola outbreak is centred in West Africa affecting countries like Sierra Leone, Liberia, Guinea, Nigeria and the Democratic Republic of Congo (DRC).

"I shall be travelling to China in November.......it will be an opportunity to explain to Chinese tour operators, Seychelles' geographical location as compared to the affected countries affected by Ebola, this is to prevent any more cancellation from the Chinese market," said Ange told the media this afternoon.

China is an emerging market for Seychelles as for the first time in the history of the island nation’s tourism industry the number of Chinese tourists to the Indian Ocean archipelago hit the 10,000 mark this month.

According to latest statistics available on the National Bureau of Statistics’ website a total of 10,300 Chinese tourists have visited Seychelles since January up to the week ending September 21, 2014, making China the 5th leading market so far this year.

This represents a 92 percent increase in the number of Chinese visitors when compared to the same period last year.

As for the Ethiopian Airlines it is represented in the Seychelles capital of Victoria by local Destination Management Company, Masons Travel, but it is expected, as was the case previously that the airline will soon be sending an agent to be based in Seychelles.