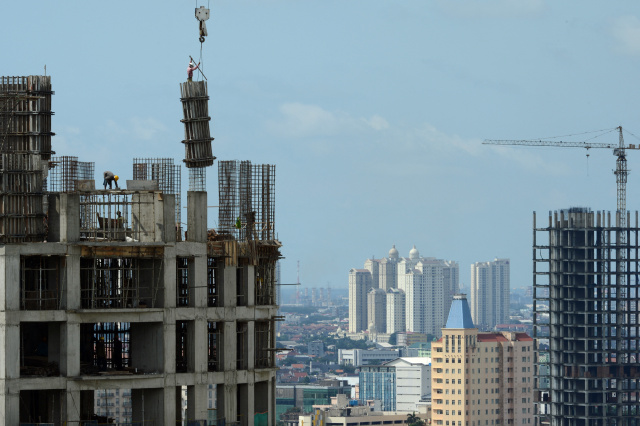 In this photograph taken on April 2, 2014, workers erect iron and concrete columns on a high rise residential tower under construction in Indonesia's capital city of Jakarta. The World Bank on April 7 said developing countries in East Asia will grow 7.1 percent in 2014 as they benefit from a stabilising global economy and withstand the impact of US stimulus cuts. However, the report said larger Southeast Asian economies, including Indonesia and Thailand, will face tougher global financial conditions and higher levels of household debt. (AFP PHOTO / ROMEO GACAD)

(AFP) - World Bank President David Malpass said Monday he expects G20 countries this week to extend debt payment moratorium for the poorest countries until the end of the year.

G20 finance ministers are due to meet virtually on Wednesday on the sidelines of Spring meetings of the International Monetary Fund and World Bank.

Malpass, who had called for a one-year extension of the Debt Service Suspension Initiative (DSSI), told reporters it looks like the G20 will agree to continue the agreement "through the end of calendar 2021."

However, that will include "very clear guidance from the G20 that that is likely to be the last or the final extension."

The program was first implemented last year amid the Covid-19 pandemic, which hit poor countries the hardest, as business and trade shutdowns made it hard for those governments to service their debt and support their people.

The G20 in October agreed to a six-month extension, until June 30.

However, Malpass said poor countries will need actual debt relief in the longer term since even with the temporary moratorium on debt payments, the overall burden in many cases is unsustainable.

Meanwhile, the IMF on Monday approved a third round of debt relief for 28 of the world's poorest countries amounting to $238 million.

The relief approved under the Catastrophe Containment and Relief Trust (CCRT) "will continue to help free up scarce financial resources for vital emergency health, social, and economic support to mitigate the impact of the COVID-19 pandemic," the IMF said in a statement.

The current round of debt service relief extends through October 15, but the IMF said it could provide another round through April 13, 2022 amounting to a total of about $964 million.

IMF chief Kristalina Georgieva announced the CCRT fund in March 2020, seeking to raise $1.4 billion, of which there have been commitments for $774 million.