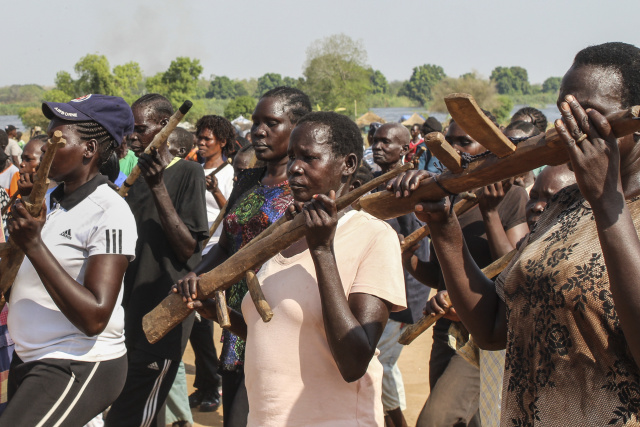 Police trainees, former soldiers of government and rebel groups, attend their training session with handmade wooden rifles or sticks and in civilian clothes at the unified training center in Rejaf on March 25, 2021. As a part of the Revitalized peace agreement, which was signed in 2018 between the South Sudan government and rebel groups to end a nearly five years of conflict, both side’s soldiers unified and train together to be personnel of national police or army. Some 8137 trainees have been training in Rejaf since January 2020 but they have no uniform and no actual arms due to the lack of financial support by the government. Currently, there are 45,000 trainees both army and police officers in the 17 unified training centers.
(Waakhe Simon Wudu / AFP)

(AFP) - US Secretary of State Antony Blinken on Monday pressed for an easing of tensions between Sudan and Ethiopia as fears grow of a spillover from the bloody Tigray conflict.

In a telephone call with Sudanese Prime Minister Abdalla Hamdok, Blinken raised "the need to de-escalate tensions between Sudan and Ethiopia over the Al-Fashaqa border area, including recent commitments to engage in dialogue to resolve the issue," State Department spokesman Ned Price said.

The fertile area claimed by both countries has seen a rise in skirmishes as Sudan sends in troops, which Ethiopia has described as an invasion.

The farmland borders Ethiopia's Tigray region where Addis Ababa launched an offensive against the local leadership in November, sending some 60,000 refugees fleeing into Sudan.

The United States has been increasingly critical of Ethiopia, a longstanding ally, with Blinken earlier saying that the Tigray campaign involved "ethnic cleansing."

The State Department welcomed a weekend announcement by Ethiopian Prime Minister Abiy Ahmed that troops from neighboring Eritrea, accused of perpetrating atrocities, had begun a promised withdrawal from Tigray.

"We are encouraged by the prime minister's announcement that the government of the state of Eritrea has agreed to withdraw its forces from Ethiopia," Price told reporters.

"The immediate and complete withdrawal of Eritrean troops from Tigray will be an important step forward in de-escalating the conflict and restoring peace and regional stability."

US relations have warmed markedly with Sudan since Hamdok, a civilian, took office in a transitional government following the toppling of dictator Omar al-Bashir.

Sudan last week paid $335 million in compensation over anti-US attacks from when Bashir welcomed Al-Qaeda as part of an Islamist turn in the 1990s. Blinken separately hailed Sudan's signing of an agreement with a rebel faction, the Sudan People's Liberation Movement-North.

Blinken also discussed the latest attempts to jumpstart diplomacy on the massive Grand Ethiopian Renaissance Dam, which Addis Ababa is moving ahead on despite protests from Sudan and Egypt which rely heavily on Nile water.

General » Be a reporter: Write and send your article » Subscribe for news alert
Tags: Sudan, Ethiopia