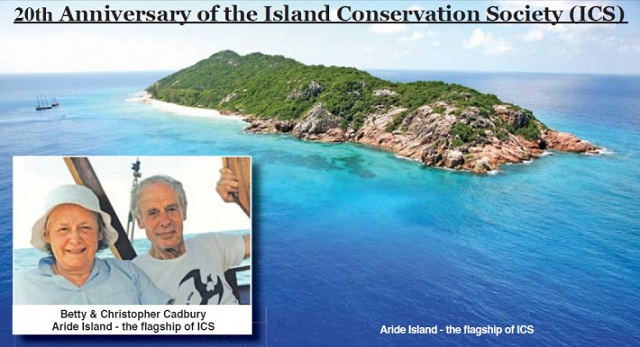 The Island Conservation Society was created in 2001 and started out with Aride island which is now its flagship. (Seychelles Nation)

(Seychelles News Agency) - The Island Conservation Society (ICS) is playing a major role in the sustainable development of islands of Seychelles.

Mandated to promote the conservation and restoration of island ecosystems of Seychelles, the society creates awareness about the vulnerability of species found on the islands and the vital importance they have to the planet's biodiversity.

SNA: What is ICS and what inspired its formation?

SE: In late 2000, a small group of people met to discuss the absence of biodiversity conservation in the outer islands of Seychelles. After several discussions, ICS was formed as a non-governmental organisation on 10th April 2001. It was created by its founders as a vehicle for their involvement in biodiversity conservation. The founding trustees were Adrian Skerrett, Glenny Savy, Gerard Rocamora and Rolph Payet. Shortly after, a Board of Trustees was formed consisting of a dozen personalities with an interest in nature conservation

In 2003, ICS began managing the Aride island. During that same year, ICS entered into an agreement with the Islands Development Company (IDC)  whereby ICS was officially appointed as the ecological advisor of IDC. Four years later, ICS opened its first conservation centre on Alphonse. One year later, a conversation centre was established on Desroches and in 2011 another conservation centre was set up on Silhouette and another on Farquhar in 2014.

Aride island was declared a special reserve in 1975 and is the flagship island of ICS. We have an island an island manager who oversees the management of the island supported by a team of conservation who does regular monitoring, collection of data, rehabilitation and restoration work on the island.

SNA: Since you are celebrating your 20th anniversary this year, what are the activities that have been organised to mark the occasion?

SE: We have had a series of activities that started two weeks ago. We had live radio interviews on SBC Paradise FM and Radyo Sesel, and we were on 'Bonzour Sesel' on Monday 5th April. On social media, we have been sharing different videos on our employees, founders and some partners. There is also a radio quiz day on Radyo Sesel and Paradise FM which started on Monday 5th April and ended on Saturday 10th.

There is also a digital exhibition that we will set up at the Bois de Rose shopping complex in partnership with the Seychelles Trading Company (STC) and the Ministry of Environment, Climate Change and Environment.

We have embraced the use of technology to limit physical contact with the public during the nationwide COVID-19 restrictions. A digital display board will be used to showcase the work that we do including some success stories by photos and videos.  On SBC and Telesesel there are documentaries being shown and these were produced by some of our staff working on the islands.

We have also released a commercial video that shows who we are, our core principles, the conservation work undertaken across the islands, including stunning the unique features of our islands ecosystems.

SNA: It has been 20 years since ICS has been carrying out conservation works. What importance does this have for Seychelles as a tourist destination?

SE: It is important to look at how the ecosystems of the islands we are based on are managed sustainably. Our coastal areas, for example, is an important nesting area for sea turtles.

When you have the presence of an organisation such as ICS on these islands, it helps with the long-term monitoring of ecosystems and associated species, including the restoration and enhancement of islands. The conservation programme is endorsed by the Ministry of Environment since 2007.

Apart from monitoring and collecting information, we are also engaged in the rehabilitation and restoration of ecosystems. This comes with a benefit. Restoring vegetation along a coastal area creates the ideal habitat for turtles to lay their eggs and this in return becomes an attraction for all island visitors. Tourist can observe these animals and learn more about them.

We also conduct presentations with hotel guests so as to raise awareness of our conservation work and environmental problems we are facing and how guests can help during their stay on the island.

SNA: What has been one of your biggest achievements during these 20 years?

SE: It is difficult to pick just one, however, it is really important to outline that all achievements, small or big, are achievements. There is one specific point about the fact that ICS is instrumental in the eradication of rats and other invasive species on Anonyme, North Island, Conception, Ile aux Rats and three islands of the Cosmoledo atoll. Invasive species such as rats and barn owls are big threats to our bird population.

ICS was also instrumental in the Seychelles white-eye recovery programme of the Ministry of Environment. The challenge still remains when it comes to the eradication of the same invasive species on other islands.

SNA: What are some of the biggest challenges that ICS has faced during these past 20 years?

SE: The first is the poaching of protected species in our Special Reserve – Aride, the flagship island of ICS - is one of our biggest challenges. We do not only see poaching of seabirds such as wedge-tailed shearwater (Fouke) and the tropical shearwater (Riga) but also poaching of birds eggs. Marine pollution is another problem. It is not only plastic that is polluting our marine ecosystems, but there are also fishing nets and other non-biodegradable litter that are polluting our marine and coastal ecosystems.

The third challenge is climate change. As global sea level rises, the coastal areas of islands are slowly eroding. The change in seawater temperature is also affecting our coral ecosystems, causing them to bleach over time. This upsets the habitats of marine species as well as destroys the natural barrier that exists between strong waves and the coast.

The fourth challenge is finance. As a not-for-profit organisation, there is always the need to raise additional funds to cover our operating costs. Another problem is the presence of invasive alien species such as cats and rats. We are still working with IDC to eradicate these species since they are a big menace to birds that nest on the ground as they feed off the chicks.

SNA: One of the challenges you mentioned is poaching. What do you feel should be done to ensure that existing conservation laws and policies are observed?

SE: A lot needs to be done and education is one of them. Educating the wider community should be a collective work by different organisations. We need to collectively reach out to the community and help people understand the environmental problems and how they can assist us in tackling various issues that continue to impact our ecosystems.  We also need to explain why we are asking people not to engage in certain illicit activities such as poaching, supported by scientific facts.

There is also a need to do proper enforcement, but at the same time, we do not want to deprive fishermen of their livelihoods. We will continue to work in collaboration with the Ministry of Environment as the regulator of environmental law and regulation, as well as other key partners to relook at effective enforcement of regulations governing Aride island special reserve.

SNA: How are conservation works being carried out on these islands helping to support food and cultural security and the well-being of our people?

SE: We need to look at conservation from a scientific perspective. Members of the public need to bear in mind that we should strive to sustainably manage all species found in Seychelles. They deserve to be protected and we should not let culture continue to dictate our consumption habits.

Secondly, when it comes to food security, it needs to be said that there are sources of food out there that can be consumed. Why do we need to consume Fouke? There are other alternatives. There is a reason why we are protecting these species as they play an important role in the ecosystem.

SNA: What should the country be doing to encourage more Seychellois to get involved in conservation?

SE: When you look at the sustainable development goals, there is goal 17 that talks about partnership for the other goals. The emphasis is on partnership as we cannot achieve much when there is no partnership.

An example is ICS together with the Ministry of Employment, Education and the University of Seychelles having a formal discussion about the skills that are lacking in biodiversity conservation. When we are able to identify the gaps and opportunities, then we can meet the skills that on demand locally but within the fields of conservation.

SNA: What are the future plans of ICS?

SE:  We plan to extend conservation centres on more IDC managed islands such as Astove, Cosmoledo, Marie-Louise and Platte. This is something that is still being discussed and hence there is no deadline to it.

We would also like to work more with government agencies so that we can get more youth specialising in biodiversity conservation. We plan to also strengthen our partnership with organisations and funding agencies so that we can collectively work together to promote the restoration and sustainable development of islands ecosystems.

SE: I would like to call on all members of the public and visitors to our islands to be more open-minded especially on the biosecurity protocols that are being implemented on the islands.

Be mindful of their actions and the impact that they may have on our ecosystems, which provide us with goods and services. We need to appreciate and respect this.

We need to maintain a healthy environment not deplete our natural resources. There will be and we are already seeing the negative consequences. Let us keep in mind that every action has a consequence. It is only by doing this that we will be able to play our role in the protection and restoration of our islands.

The Interview » Be a reporter: Write and send your article » Subscribe for news alert
Tags: Island Conservation Society, special reserve