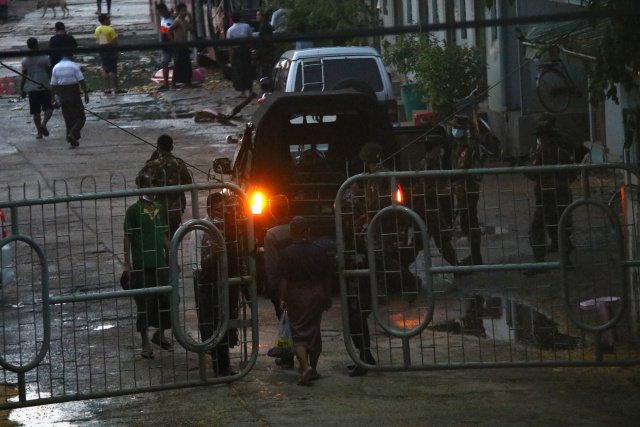 Security forces stand guard by entrance gates following an explosion at a bus station in South Okalapa township in Yangon on April 6, 2021, amid a crackdown on protests against the military coup. (STR / AFP)

(AFP) - Myanmar's ambassador in Britain on Wednesday said a Yangon military-linked figure had "occupied" the embassy in London and barred him from accessing the building.

"Diplomacy is the only response and answer to the current impasse," Kyaw Zwar Minn said in the statement that was tweeted by British Foreign Secretary Dominic Raab.

Protesters gathered outside the Myanmar embassy in London on Wednesday as reports emerged that the ambassador had been locked out and barred from entering the building.

Kyaw Zwar Minn told the Daily Telegraph that "when I left the embassy, they stormed inside the embassy and took it.

"They said they received instruction from the capital, so they are not going to let me in," he added, calling on the British government to intervene.

Britain has been a strong critic of the Myanmar military since it seized power there in February, and last week ramped up sanctions against business conglomerates wholly or partially overseen by the generals.

The ambassador told AFP that he would stay outside the building "all night", explaining "this is my building".

Metropolitan Police said that they were "aware of a protest" outside the building in the Mayfair neighbourhood, and that public order officers were in attendance.

General » Be a reporter: Write and send your article » Subscribe for news alert
Tags: Britain, Myanmar