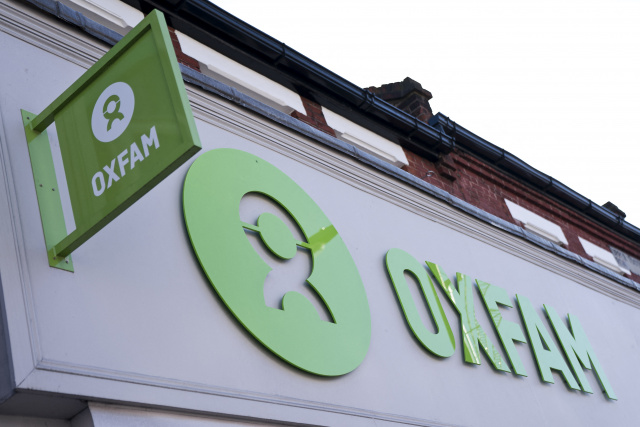 'Oxfam' signage is pictured outside a high street branch of an Oxfam charity shop in south London on February 17, 2018. Oxfam fired four staff members for gross misconduct and allowed three others to resign following an internal inquiry into what happened in Haiti in 2011. (Justin TALLIS / AFP)

(AFP) - The British government said Thursday it had suspended funding for Oxfam after the aid charity suspended two staff members in the Democratic Republic of Congo over claims of sexual misconduct and bullying.

"All organisations bidding for UK aid must meet the high standards of safeguarding required to keep the people they work with safe," a Foreign Office spokesperson said in a statement.

"Given the most recent reports which call into question Oxfam's ability to meet those standards, we will not consider any new funding to Oxfam until the issues have been resolved."

The charity, which works in 67 countries, said on Friday that it had suspended the two staff members as part of an external investigation that began in November.

It said this was over "allegations of abuses of power, including bullying and sexual misconduct".

Oxfam said it had reported this to the Foreign Office and Charity Commission, a government department that regulates charities.

In response to the suspension of UK funding, an Oxfam spokesperson said "we will continue to keep them informed as the investigation concludes its work".

The Times newspaper reported Friday that whistleblowers at Oxfam had been raising concerns about alleged misconduct in the aid mission to DR Congo since 2015.

The anti-poverty charity was hit by a major scandal in 2018 over the way it handled staff in Haiti who admitted using prostitutes.

Its chief executive quit after it emerged that several of the aid workers in Haiti deployed following a 2010 earthquake were allowed to quit, including the then country director.

In March, Foreign Secretary Dominic Raab allowed Oxfam to re-apply for government funds for the first time in three years after the Charity Commission said it had made "significant strides" in safeguarding since the Haiti scandal.

Oxfam had been receiving some £30 million (35 million euros, $41 million) in state funds annually.

Oxfam announced in 2020 that it was closing 18 offices and cutting nearly 1,500 jobs due a drop in funding linked to the coronavirus pandemic.

General » Be a reporter: Write and send your article » Subscribe for news alert
Tags: Britain, DRCongo