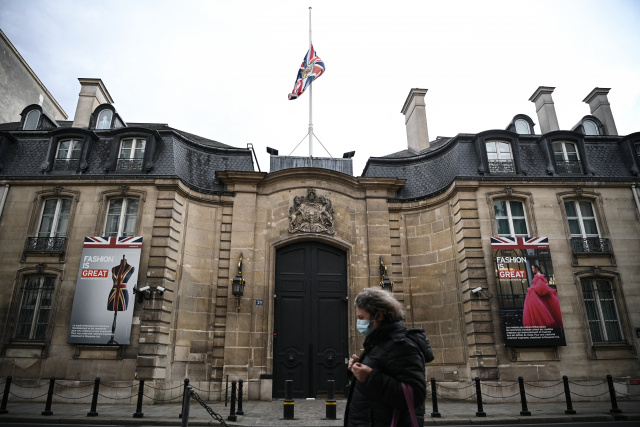 A pedestrian walks past the British Embassy where the Britain's national flag, the Union Jack, flies at half-mast, in Paris on April 9, 2021 after the announcement of the death of Britain's Prince Philip, Duke of Edinburgh. Queen Elizabeth II's husband Prince Philip, who recently spent more than a month in hospital and underwent a heart procedure, died on April 9, 2021, Buckingham Palace announced. He was 99. (Anne-Christine POUJOULAT / AFP)

(AFP) - As a senior royal, Prince Philip's death would normally have triggered a well-rehearsed protocol honed to precision over decades, involving pomp and pageantry before a ceremonial send-off.

But coronavirus restrictions banning large public gatherings have forced royal officials to hastily revise the plans for his funeral, codenamed "Operation Forth Bridge".

A day after the Duke of Edinburgh's death, aged 99, Buckingham Palace said Saturday the ceremony would take place at St George's Chapel, Windsor Castle, at 1400 GMT on Saturday, April 17.

It will be preceded by a national minute's silence.

Public elements of the funeral have been taken out, and the whole service will be televised from behind the castle walls to prevent large crowds assembling.

St George's Chapel in the sprawling royal residence west of London last made global headlines as the venue for the marriage of the duke's grandson, Prince Harry, to Meghan Markle, in 2018.

A more sombre mood will prevail as Harry returns from the United States, where he and Meghan moved last year and from where they have launched a series of stunning broadsides against the royals.

All eyes will be on Harry for signs of tensions with his family, whom he and his mixed-race wife accused in a recent interview of racism, and neglecting her mental health.

Meghan, who is pregnant with the couple's second child, has been advised against travelling on medical grounds.

In all, just 30 people will attend as guests at the funeral, in line with government coronavirus guidelines.

All will have to wear facemasks and observe social distancing rules.

"Operation Forth Bridge" had been intended to have some 800 people at the funeral of the duke -- Britain's longest-serving consort, who was known for his aversion to "fuss".

The duke's coffin is currently at the private chapel of Windsor Castle but will be moved on the morning of the funeral in a small ceremonial procession to St George's Chapel.

It will be transported in a specially modified Land Rover that he helped to design, followed on foot by Charles and other senior royals.

The coffin will be draped with the duke's personal standard, and decorated with a wreath of flowers, as well as his Naval cap and sword.

There will be a strong military presence at the funeral, reflecting his life in and association with the armed forces, including representative detachments in the castle grounds.

The route of the procession will be lined by members of the Royal Navy, the Royal Air Force and several British Army units.

Military guns from the castle's east lawn will be fired during the procession, as a mourning bell tolls.

A military guard of honour and band will receive the coffin, and "God Save the Queen" -- the national anthem -- will be played as the coffin nears the chapel.

Royal Marine pall bearers will carry the coffin up the steps and pause for the minute's silence before it is received by the Archbishop of Canterbury and the Dean of Windsor.

A period of national mourning began on Friday and will run until the day of the funeral. The royal family will observe two weeks' mourning.

A Buckingham Palace spokesman said: "The Covid-19 pandemic has of course required us to make significant adaptations to the original arrangements for His Royal Highness's funeral.

"However, we are certain that the occasion will be no less fitting a farewell to His Royal Highness, marking his significant duty and service to the nation and the Commonwealth."

He added: "Despite these necessary changes, they still very much reflect the personal wishes of the duke.

"Although the ceremonial arrangements are reduced, the occasion will still celebrate and recognise the duke's life and his more than 70 years of service to the Queen, the UK and the Commonwealth."