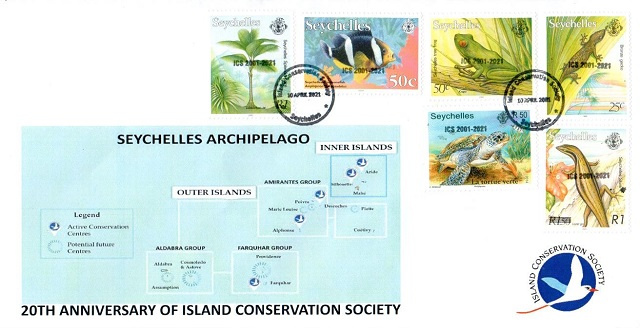 The newly released commemorative cover consists of the ICS logo, a map showing the five islands where ICS operates, as well as six postage stamps showing flora and fauna found in Seychelles. (ICS)

(Seychelles News Agency) - Five endemic species of Seychelles are being featured on a new commemorative postal cover launched on Saturday.

The limited-edition cover was released to mark the 20th anniversary of the Island Conservation Society (ICS). The work is in collaboration with the Seychelles Postal Services.

In the world of philately - the collection and study of postage stamps -- a cover is an envelope that has passed through the mail, has been franked with either a postage stamp or meter stamp and appropriately cancelled.

The newly released commemorative cover consists of the ICS logo, a map showing the five islands where ICS operates, as well as six postage stamps showing flora and fauna found in Seychelles.

The most famous varieties of overprints are commemorative issues. These can command significant interest in the field of philately the world over.

The new commemorative cover is expected to be popular with collectors in Seychelles and overseas. With only 2,000 printed copied, the covers are available for sale at the Seychelles Post Office at a price of SCR100 ($5.3).

The world's largest population of this warbler breeds at Aride Island Nature Reserve, managed by ICS and important populations of green turtles breed at the other outer islands, where ICS has several conservation centres.

The deputy chief executive of ICS, Shane Emilie, told SNA that he and his team chose these postage stamps as these are species that can be found on the islands where ICS operates.

"We wanted to do something different other than having an exhibition. Our founding chairman, Adrian Skerrett, is a person who has a personal interest in stamp collection. We wanted to honour our endemic species, and as they were already featured on a few postage stamps, we decided to make a commemorative cover that will mark the end of the celebration," said Emilie.

He added that by doing so, people will be able to keep a souvenir of the event. He went on to suggest that the commemorative cover can also be given to a loved one who loves conservation and biodiversity as a gift.

The first commemorative overprint issue in Seychelles came in 1967 and was a set of four stamps overprinted 'Universal Adult Suffrage 1967'.