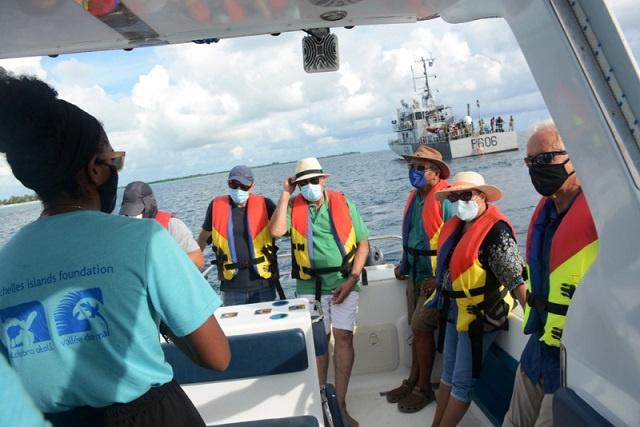 The visit started with a tour of a World Heritage Site -- Aldabra, and to arrive there first a plane to Assumption and then board a boat to the atoll. (State House)

(Seychelles News Agency) - The visit to some of Seychelles' outer islands by a group of foreign diplomats was a great opportunity to better demonstrate the challenges the island nation faces, especially in maritime security and climate change, Sylvestre Radegonde, the Minister for Foreign Affairs and Tourism, said Tuesday.

The visit started with a tour of a World Heritage Site -- Aldabra, home to the world’s largest population of giant land tortoises. Aldabra Atoll is also the second-largest coral atoll in the world. The visit then continued with brief stops to Alphonse, Assumption, Astove, Farquhar and Desroches islands.

Members of the diplomatic corps included ambassadors and high commissioners, including Guo Wei from China, Francesca Alexandra Azais from the Sovereign Military Order of Malta, Dalbir Singh Suhag from India, Artem Kozhin from Russia and Dominique Mas from France.

Representatives from the British High Commission and the Japan and Sri Lanka embassies also took part. The visit was organised as a symbolic gesture of appreciation for the continuous support the respective countries have extended to Seychelles, an archipelago in the western Indian Ocean.

Though 11 foreign diplomatic bodies having a representative in Seychelles were invited to take part, the UAE, Libya and Cuba were unable to attend.

"The trip was an opportunity for the diplomatic corps to know the real Seychelles. It also gave them the possibility to see the challenges that we face, especially when we say we have a problem when it comes to maritime security. When you see the extent of the ocean that needs to be protected, you see the risks that exist when there isn't a presence at sea," said Radegonde.

He added that the delegation also saw first hand the threats that climate change, in the form of coastal erosion, poses to the outer islands.

"This has been a very fruitful voyage. It allowed them to better understand us when we ask the international community for help be it through the provision of materials or financial aids. I think that as a result of the visit, foreign ambassadors to Seychelles today have become ambassadors of Seychelles. I am convinced that they will become defenders of Seychelles' interest in the domains that I have talked about," he continued.

Radegonde said that through the trip, the delegation also saw business opportunities.

"There are islands that have development potential. In my opinion, Assumption has the potential to become a staging post if anyone is interested in this possibility. When I spoke to the ambassadors, they saw the possibility to maybe have a hotel on Assumption that will be able to accommodate people before they go to Aldabra for day trips," said Radegonde.

He added that this discussion is yet to be done with the Islands Development Company (IDC), which manages the island.

To reach Aldabra, a visitor first takes a plane to Assumption, and then boards a boat to the atoll.

"We have talked about the possibility to open the island so as to allow more Seychellois to know and learn more, not only about Aldabra as an atoll, but also about the conservation efforts being undertaken on the island. It is now up to SIF to see how they can implement the desire that we have," said Radegonde.