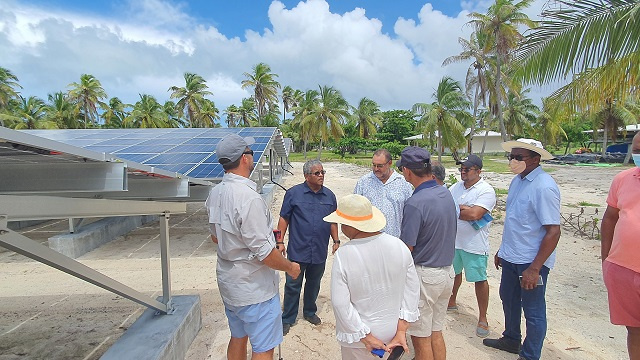 (Seychelles News Agency) - The Islands Development Company (IDC) is on track to having all the islands it manages in Seychelles running solely on green energy after the inauguration of solar farms on Astove and Farquhar islands.

Comprising 342 glass solar panels, the photovoltaic power station on Astove can produce 150 KW of electricity, which will cover 93 percent of the island's electricity consumption.

On Farquhar, the solar farm has 510 panels which give an output of 250 KW of electricity which means that 94 percent of the island's electricity needs will be produced by solar energy.

The company, which is responsible for the sustainable development of the outer islands, manages 14 islands.

The launching of the two stations means that at the moment IDC has three solar farms up and running. The first solar setup was inaugurated in November 2018 on Alphonse.

IDC's chief executive, Glenny Savy, announced that a fourth, much bigger solar farm is under construction on Desroches. Expected to come online in June this year, the station will have a capacity of 2.5 megawatts.

"Before June next year, most, if not all IDC-managed islands will be using solar energy, meaning we will be using 100 percent green energy," said Savy.

With the solar farms on Farquhar and Astove "means that we no longer need to transport diesel from Mahe. ... This will bring a huge saving for these two islands. As IDC we will save a lot of money and as a country, we will no longer be importing this fuel and as such will not need foreign exchange to import it," added Savy.

Work on the two solar farms commenced last October and was completed in April. Money saved thanks to the solar power will go towards further infrastructure development on the islands.

Savy added that other than allowing IDC to save money, pollution caused by the electricity-producing machinery will no longer take place.

The solar systems also bring back tranquillity on the islands, which Savy called "really fantastic."

The inauguration of the two solar farms coincided with the visit of Seychelles' president and a delegation which included diplomats based in Seychelles to six outer islands - Assumption, Aldabra, Alphonse, Astove, Farquhar, and Desroches - from April 9 to April 12.

The trip was organised as a symbolic gesture of appreciation for the continuous support foreign diplomats and their respective countries have extended to Seychelles.

On his way back from the UNESCO World Heritage site of Aldabra, President Wavel Ramkalawan and his delegation stopped on Astove and Farquhar for the official launch of the solar farms.

The Minister for Foreign Affairs and Tourism, Sylvestre Radegonde, who also went on the trip, commended the work done by IDC on Monday.

"IDC is doing a great job managing the islands and I commend them for the developments that they have carried out on these islands. Assumption is one that we see has untapped potentials," said Radegonde.