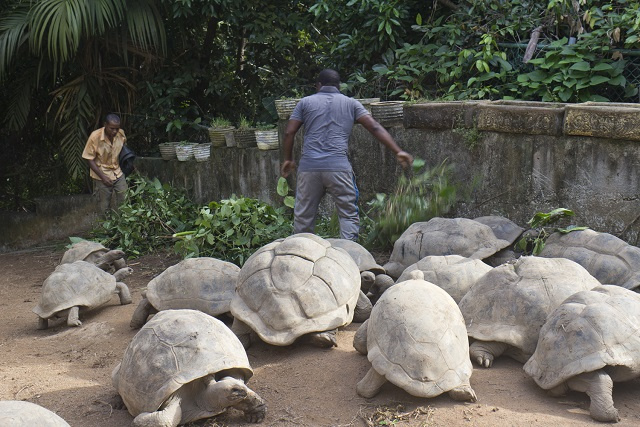 The exercise is also aimed at gathering information about the welfare of the tortoises. (Salifa Karapetyan, Seychelles News Agency)

(Seychelles News Agency) - Seychelles’ Ministry of Environment is undertaking a registration exercise to establish the population of the endemic Aldabra giant land tortoise being kept in captivity.

The exercise is also aimed at gathering information about the welfare of the tortoises – often kept as pets -- their living conditions and if necessary, take measures to improve their conditions. This is in preparation for a national census set for next year, which is held every ten years, the last being done in 2011 and 2012.

The senior public relations officer from the Ministry of Agriculture, Climate Change and Environment told a press conference on Wednesday that the exercise will cover the three main islands of Seychelles – Mahe, Praslin and La Digue.

“On the other islands, we have partners and NGOs (not for profit organisations) which are doing this exercise on an annual basis and they send us the information. We have decided to do it every 10 years to get information about the population and factor in how many males and females, as well as which region they are based in,” explained Linne Dubignon.

The registration will also establish their pattern of distributions on the most populated islands of Mahe, Praslin and La Digue as well as on the other islands.

Registration has already started and will remain open until September 2021. “Due to COVID-19, the ministry is implementing a new strategy for registrations. Owners are requested to register by filling out an application which will be available on our online platform, Facebook page and website -- www.meecc.gov.sc,” added Dubignon.

Many of the Indian Ocean species were thought to be driven to extinction by over-exploitation by European sailors, and they were all seemingly extinct by 1840 with the exception of the Aldabra giant land tortoise on the atoll of Aldabra which is a UNESCO World Heritage Site.

Once the registration is completed, officers from the environment department will conduct home visits to establish their conditions, whether their living areas are conducive if they are being given the right food, adequate and their general wellbeing.

“That done the owners of these tortoises will be given a certificate to prove that they had taken part of the census and they have completed all the necessary formalities,” said Dubignon.

If tortoises are found not to be living in conducive conditions the owners will be advised on the proper way to keep these species. The ministry confirmed that they have received complaints of tortoises being mistreated.

According to the last census, there were 4,000 tortoises being kept in captivity by individuals or tourism establishments as pets or for breeding purposes, something that the ministry is encouraging to ensure the sustainability of its population.