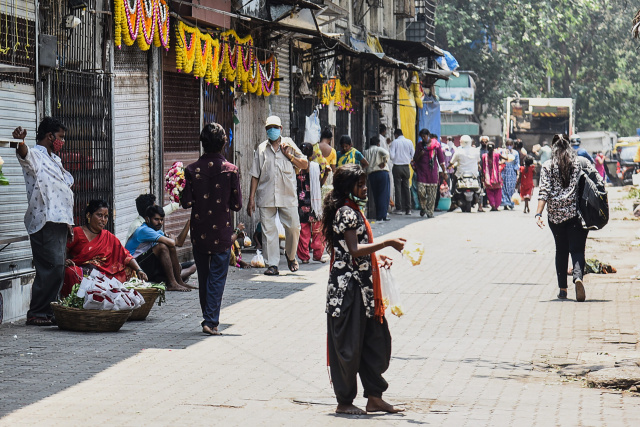 A young vendor (C) waits for customers in front of closed shops during a lockdown imposed by the state government amidst rising Covid-19 coronavirus cases, in Mumbai on April 15, 2021.  (Manjunath Kiran / AFP)

While nations like Britain have celebrated the beginning of normality and extended vaccine rollouts, some South Asian countries are grappling with fresh -- and more terrifying -- virus waves.

More than 200,000 cases were logged in the past 24 hours in India, where authorities are grappling with shortages of vaccines, treatments and hospital beds.

Having let its guard down with mass religious festivals, political rallies and almost unfettered sports crowds, the nation has this month seen two million fresh infections -- a figure that looks set to continue growing.

Siddharth Chakrapani, one of the organisers of India's massive Kumbh Mela festival, said devotees "believe that Maa (mother) Ganga will save them from this pandemic".

"Our faith is the biggest thing for us," he added.

This week India overtook Brazil to become the country with the second-highest number of cases worldwide.

Despite New Delhi's desperation to avoid a repeat of the economically painful lockdown of a year ago, some states -- such as Maharashtra and its capital Mumbai -- are tightening the screws to prevent deaths.

With lockdown looming, millions of migrant workers streamed out of Mumbai in scenes reminiscent of the exodus from Indian towns and cities a year ago when the government halted all activity almost overnight.

As cases mount, hospitals are struggling to cope, running short of beds, oxygen and coronavirus medicines like remdesivir.

And Delhi's much publicised vaccine drive to inoculate all 1.3 billion citizens has stumbled.

Just 114 million shots have been administered so far -- and stocks are running low, according to authorities.

Elsewhere in Asia storm clouds were once again gathering over the Tokyo Olympics.

Top politician Toshiro Nikai, the ruling party's number two, said the games must be cancelled "without hesitation" if the virus situation is too severe.

Although officials were quick to dismiss Nikai's remarks, public opinion is turning against the event with towns cancelling torch events as the nation worries over a fourth wave of infections.

In Britain crowds gathered in mosques during Ramadan -- not only to pray, but to receive a vaccine.

The pandemic has particularly hit ethnic minorities in the UK, where more than 127,000 people in total have died from Covid-19 -- one of the worst tolls in the world and the highest in Europe.

And vaccine hesitancy is disproportionately present among some groups, even as Britain drives ahead with a mass inoculation campaign that has so far seen more than 32 million people have a jab.

But local leaders are cautiously optimistic as a fresh push for vaccines begins to reach these communities.

"The message is getting through," said Hasnayn Abbasi, a doctor heading the East London Mosque's vaccination centre.

In New Zealand -- widely lauded for its adroit handling of the virus -- authorities began trialling a monitoring app designed to detect coronavirus before the user develops any noticeable symptoms.

In what is believed to be a world first, the "elarm" app connects to devices like fitness trackers and smart watches, using artificial intelligence to check for tell-tale signs.

Lebanese doctor Riad Sarkis has a very different suggestion to curb the deadly virus, as beside him one of his instruments enthusiastically wagged his tail.

Specially trained sniffer dogs can detect illness in a person in a few seconds, including in very early stages when a PCR test would yield a negative result.

"The day we build a machine with an electronic nose that amplifies smells 10,000 times, then we can replace the dogs. For now, we need them," Sarkis said.

"When Covid appeared, I thought why not try," he recounted. "And it worked".