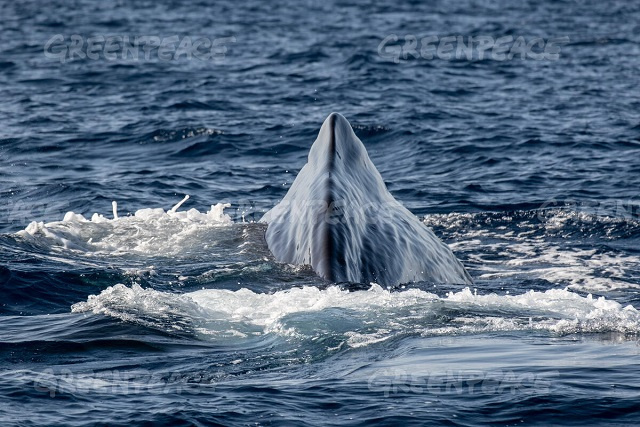 During the transit to the Saya de Malha Bank the team also documented a group of sperm whales in Seychelles. (Tommy Trenchard/Greenpeace)

(Seychelles News Agency) - An underwater expedition by Greenpeace International saw an array of wildlife -- including sperm whales and spinner dolphins -- and a healthy seagrass meadow along the Saya de Malha Bank during a trip to the region, said a Seychellois marine scientist.

The expedition on the Saya de Malha Bank, which is part of the Mascarene Plateau region between Seychelles and Mauritius, was done from February 27 to March 30 to learn more about its underwater life.

Seychellois scientist Sheena Talma, who took part in the expedition, told SNA that more than 500 person hours of visual surveying recorded 58 sightings of cetaceans such as whales and dolphins.

"This included two feeding groups of endangered sperm whales as well as pilot whales, spinner dolphins, spotted dolphins, Blainville's beaked whales, and Bryde's whales and a killer whale. During the transit to the Saya de Malha Bank the team also documented a group of sperm whales in Seychelles," said Talma.

"Sighting of whales and dolphins tell a really good story. They play an important role in our global ecosystem as some of them are apex predators which means that they are right on top of the food chain. This indicates how healthy an area is. They are also ecosystem engineers and organic ocean fertilisers – their poop is linked to the productivity of an area," said Talma.

She further outlined that the group also captured underwater footage of the seagrass growing on the bank. The Saya de Malha Bank is known for supporting the world's largest seagrass meadow and as such is one of the biggest carbon sinks in the ocean.

"They looked healthy. Seagrass is really good because it absorbs carbon from the atmosphere and stores it in its roots and in the ground so that it doesn't contribute to any atmospheric carbon. If we destroy these seagrass bed, this means that we will also be taking away these really important carbon stores," said Talma.

By keeping carbon safely locked, seagrass meadows help slow down climate breakdown, and they are critical feeding and breeding grounds to a wealth of wildlife. A 2012 study in the journal Nature Geoscience showed that seagrass can store more than twice as much carbon from planet-warming carbon dioxide per square mile as forests do on land.

As a plea to the world to protect seabed and seagrass meadows, a 24-year-old Mauritian climate activist, Shaama Sandooyea, held an underwater protest above the Saya de Malha bank, during the expedition.

"We all know that the area has been an area of interest for fossil fuel exploration.  In my view, we need to do more research to really understand how productive it is and how it is linked to the rest of the fisheries, not only in the Seychelles' waters but in the Indian Ocean. There is still lots of work that needs to be done to be able to come up with the right management strategies to ensure that we are not conducting harmful practices without the knowledge to back it up," said Talma.

As part of the team onboard Arctic Sunrise, Talma was helping with the collection of environmental DNA, also known as e-DNA. The DNA is collected from a variety of environmental samples such as soil, seawater, snow or even air rather than directly sampled from an individual organism. In the expedition, e-DNA was collected by gathering some water samples.

Once the sample is collected, it is filtered and the small particles are processed to establish which animal lives in this part of the ocean. She outlined that other discoveries can be made in the next coming months as e-DNA sample results come in.

"These e-DNA samples are being analysed in a lab in France with the collaboration of Exeter University, myself, and my Mauritian colleague who was on the vessel with me. These results will be available sometime next year," said Talma.

Further results are expected to come in as the team analyses acoustic hydrophone recordings that were made during the expedition.