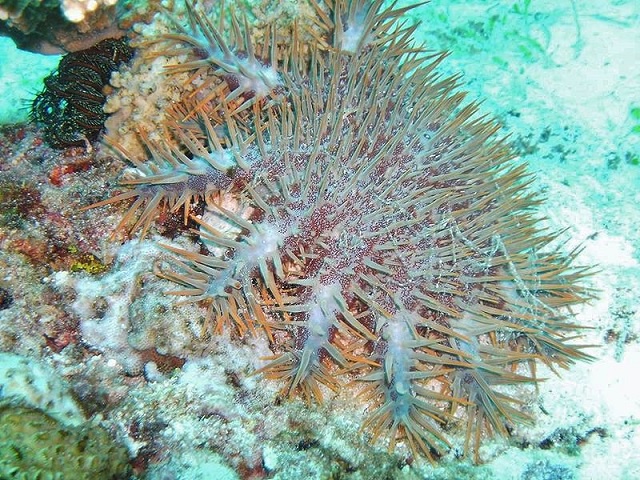 (Seychelles News Agency) - Diving enthusiasts in the Seychelles waters are often encountering a crown-shaped starfish with several hundred elongated and sharp, venomous spikes as coral reefs have become plagued by this unusual threat.

The Beau Vallon region in the northern part of the main island of Mahé is reported to have been the main area of activity of the crown-shaped starfish which according to divers can be seen on reefs between 5 to 25 meters deep and are not very common in shallow waters.

This type of starfish, named crown-of-thorns starfish (COTS), is considered as one of the largest sea stars in the world.

It occurs naturally in different tropical regions including the Seychelles, an Indian Ocean archipelago of 115 islands with a small population of 90 thousand, many of whom are entirely dependent on the ocean for their livelihoods.

In low densities, the starfish can be beneficial to coral reefs as it feeds on fast-growing corals, allowing a greater variety of coral species to colonize the reef.

However, in high densities the creature can turn into the ultimate coral predator by destroying large areas of reef in the space of only a few days.

The director of RCINT, Dr Udo Engelhart, has reported that from the training they noticed a high density of COTS in the Beau Vallon area, which appeared to be spreading along the north-western coastline of Mahé. They also saw an increasing density of the starfish near the Baie Ternay Marine National Park.

“Taking appropriate measures to control starfish densities is critically important as coral mortality due to the feeding activities of the starfish can reach levels similar to a severe coral bleaching event, as Seychelles' reefs experienced in 1998,” said Dr Engelhardt.

“We were shocked to find 20 to 30 times more crown-of-thorns starfish in the Beau Vallon Bay area. Based on Dr Engelhardt’s assessment, this is above sustainable levels,” she said.

“Moreover, 60 to 75% of coral reefs in the area especially had been completely wiped out, completely dead.”

The outbreak now appears to have spread to reefs and smaller islets between the second and third most populated islands of Seychelles, Praslin and La Digue.

Speaking to SNA, diver Ellen Lebihan, from the Octopus Diver Center, Anse Volbert, Praslin, said that they had “noticed an increase in the creature in some areas, especially near the Ave Maria rocks and other islets.”

Lebihan said that “some areas have now become completely barren as the creatures continue to feed and spread.”

With the starfish’s spawning season fast approaching and an expected increase in sea temperatures to at least 27 degrees Celsius by early next month, there were fears that the outbreak could reach plague proportions as countless more larvae of the starfish could be spread, if the adults were not removed in time.

In an interview with SNA, the Ministry of Environment and Energy said the government viewed the abundance and associated risks of COTS, as a “national concern”.

The Ministry has since facilitated an emergency eradication programme within badly affected areas, with the help of marine partners including dive centres, NGOs, the Seychelles National Parks Authority and other volunteers.

“With the limited funds, what we are doing is just removing the adult starfish and disposing of them. This method requires careful handling as the creatures is very venomous and their spikes are very dangerous,” said Dr Bluemel.

This resulted in the removal of over a thousand adults and juvenile COTS in the Beau Vallon area but Dr Bluemel said many more were still out there, especially smaller ones which were difficult to spot.

Local diver Mike Bamboche from the Ocean Dream Divers located in the vicinity of the area which had recently been cleared of starfish told SNA that there has been a remarkable improvement in affected areas, however, he reported that adults and juveniles could still be found in lower densities in other areas north of Beau Vallon.

A similar operation has also been initiated in the vicinity of Praslin using volunteers and divers from local dive centres and non-governmental organizations.

Dr Bluemel said that four different age groups of starfish were collected during removals, including juveniles and large adults preparing to spawn.

Large females release millions of eggs into the ocean, fertilised by sperm released into the water by males. The breeding season takes place from November to January each year, although this can vary on water temperatures and other conditions.

According to Dr Nirmal Shah, the Chief Executive Officer of a non-governmental environment organisation, Nature Seychelles, which has been involved in a reef restoration project on the Cousin Island Special Reserve for the past four years, similar outbreaks have occurred before in Seychelles.

“They were first detected in the 1970s and it worried the authorities so badly that international scientific assistance was requested and natural predators like the triton shell (lansiv) were protected,” said Dr Shah.

“COTS have been recognized as a serious threat ever since. No wonder the Seychelles One Rupee coin has on its flip side an image of a triton shell eating a crown of thorns starfish!”

Dr Shah believes this outbreak in particular may be very serious, particularly since the delicate reefs, still recovering from the 1998 El Niño coral bleaching event, would once again be in peril after showing positive signs of recovery in recent years.

Dr Engelhard said that such an outbreak can be related to human activities.

“Research we have conducted in Australia has clearly shown that human activities, such as increasing the levels of certain nutrient in sea water as well as over-fishing of the natural predators of the starfish can lead to outbreaks,” he said.

Natural predators of the starfish include the Giant Triton snail, harlequin shrimp and puffer fish.

According to Dr Engelhardt, it could be another ten to fifteen years before the hard coral can restored to its pre-outbreak levels.

But Dr Shah is not quite so optimistic about controlling the starfish, warning that attempts to control the outbreaks would be expensive and unsustainable without addressing the root cause of the problem, namely the loss of the starfish’s natural predators and an overabundance of nutrients in the water.

“In Australia it is said that efforts to control COTS have been expensive and ineffective,” he explained, adding that in 2003, $3 million was spent to try to control a plague of the starfish.

“These methods involved cutting up the animals, which tend to re-grow their arms, taking them out of the water to dump on land which is very tedious and difficult, or injecting them with a single shot of poison.”

A fine-scale survey is now underway, both to further assess the presence of COTS in other areas and to determine the most effective solution to control their spread.

The survey is being coordinated by the Seychelles National Parks Authority and, according to Ronley Fanchette, the Director for Wildlife, Trade and Conservation in the Seychelles Ministry of Environment and Energy, will assess the abundance and distribution of COTS within Marine Protected Areas.

Other NGOs, such as the Island Conservation Society and Nature Seychelles are conducting surveys outside marine park areas.

“We also receive reports from dive centres whenever they come across large density of COTS in a particular area,” said Fanchette, who added that additional funding was being sought from the Indian Ocean Commission to find long-term solutions to the problem.