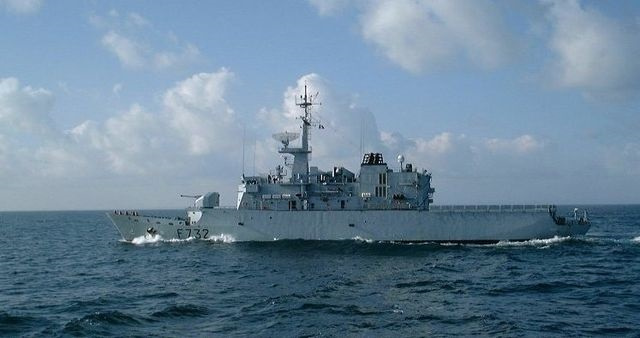 FNS Nivôse is on her way back to Reunion after a month-long deployment in the northern Indian Ocean. (Net Marine/Wikimedia) Photo License: CC BY-SA 3.0

(Seychelles News Agency) - The amount of drugs being trafficked in the region remains a big challenge, Seychellois and French authorities said on Friday.

Seychelles' Minister for Internal Affairs Errol Fonseka and Captain Frédéric Barbe, commanding officer of the French surveillance Fregate FNS Nivôse, held a press conference on board the frigate, which is on a five-day call in Port Victoria.

Minister Fonseka said that despite the island nation updating its laws, more effort is needed in maritime security.

"Border control is of capital importance. Border control does not rely only on equipment and resources but most of all in a team that we trust in. I hope that the relation between Seychelles and France reinforces and brings in more opportunities," said Fonseka.

He added that the visit of the fregate gives value to the cooperation. FNS Nivôse is on her way back to Reunion  – a French department in the Indian Ocean - after a month-long deployment in the northern Indian Ocean.

This stopover of the ship with its 104 crew concludes the deployment where the ship was involved in numerous successful counter-narcotics operations. Overall, the Nivôse has seized more than two tons of heroin and methamphetamines in 2021.

A communique from the French embassy in Seychelles – 115 islands in the western Indian Ocean – said the seizures are "an effort bound to undermine the business model of terrorist groups that threaten peace and stability ashore, from the Middle East to Eastern Africa or Europe."

The commanding officer of the frigate said that over the years officials have noticed a reduction in piracy in the region, but that drug trafficking has increased remarkably during recent years.

During its days in Seychelles officers from the vessel also took part in a two-day joint military exercise with their Seychellois counterparts from the Coast Guards. Around 40 personnel from the patrol ship PS Etoile and an SPDF aircraft participated in the exercises which were both theoretical and practical.

Colonel Michael Rosette, Chief of Seychelles People Defence Forces (SPDF), said the exercise is relaunching cooperation and exchanges between the two armed forces aimed at keeping the Indian Ocean safe and sound, which has been halted due to COVID-19.

Captain Barbe, added that the visit does allow its crew to relax but also to enhance the long-standing cooperation between France and Seychelles.

"For both its historical bond with France and the warmness of its citizens, the Republic of Seychelles is a much-appreciated port call. Nevertheless, we also share security interests. It was true when we were facing Somali piracy. It still is nowadays, as drug traffickers seem to have taken advantage of the pandemic to expand their networks. Therefore, my goal is to build on the mutual trust that exists between the Seychelles Defence Forces and the French Armed Forces in the Southern Indian Ocean."

The French ambassador to the island nation -Dominique Mas - who undertook a visit to Seychelles' outer islands last weekend, added that the visit gave him an overview of the size and extent of Seychelles' territory and  drug trafficking which is a concern to islands and many countries.