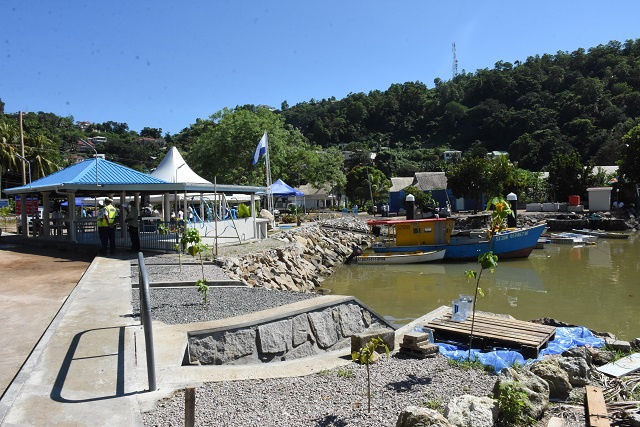 The construction of the facility started early last year and consists of a gear store with 12 units to be rented out to fishermen, an ice plant, a fish market, parking and pontoons. (Joena Meme)

(Seychelles News Agency) - The fishermen community of La Retraite, a sub-district of Anse Etoile of Seychelles' main island of Mahe, now has a high standard fisheries facility with all modern conveniences made possible with financial assistance from the European Union.

The facility, located on a former dump site, was officially opened on Saturday by the Minister for Fisheries and the Blue Economy, Jean-Francois Ferrari, and the French Ambassador to Seychelles, Dominique Mas.

The construction of the facility started early last year and consists of a gear store with 12 units to be rented out to fishermen, an ice plant, a fish market, parking and pontoons at a total cost of almost SCR4.9 million ($351,000).

In his address, Minister Ferrari thanked the European Union for its continuous support which he said it is very important for the fisheries sector of Seychelles, an archipelago in the western Indian Ocean.

He told the fishermen of the Anse Etoile district that this is their facility.

"When we make development in this country we always need to think about who will benefit. Today we are in Anse Etoile and we have made a facility for the people of Anse Etoile especially for the fishermen. We've transformed what used to be called a smelly corner into a beautiful fishing port. It is you fishermen who will benefit but there is a condition and that is that you look after this project," said Ferrari.

On his side, Ambassador Mas, who was representing the EU Ambassador Vincent Degert, said he was happy to see that the fishermen in the area have an infrastructure that will allow them to sell and stock their fish in hygienic conditions.

"The ceremony of today is another milestone in the EU-Seychelles relations. We hope that this facility will provide measurable output and economic returns for the community and finally for the country. This facility will benefit all the people of Seychelles through the supply of fish and ultimately improve the food security conditions as a whole. It will enable the fishermen to benefit from their activity," said Mas.

Fisheries is the second top contributor to the economy of Seychelles with a population of 98,000.

The chief executive of the Seychelles Fishing Authority (SFA), Nichol Elisabeth, said the project has been well conceived and executed and the facility has equipment that is of very high standard.

"The importance today is to make sure that fishermen of La Retraite, Anse Etoile and Glacis have a proper facility to work in. This is phase one and we are discussing with the fisheries ministry to look at the second phase which will make the place one where fishermen and families can come and socialise.

He said that SFA has other projects being developed in other districts namely Cascade, Anse Aux Pins, Baie Ste Anne and Grand Anse and all of them will materialise this year.

The project has been handed over to the La Retraite Fishermen Association which will ensure proper use of the facility.

A 32-year-old fisherman of La Retraite with 15 years of experience, Jean-Paul Dubel, told SNA that all fishermen in the area have welcomed the new facility.

"I am happy that this place has been well organised for the fishermen as before we did not have facilities such as an ice plant. We now have a place to store our fish and work in a hygienic environment. This is a big help for us and all the fishermen in the area really love the facility. We now have to take care of it now and let others who come here that they have to use it well," said Dubel.