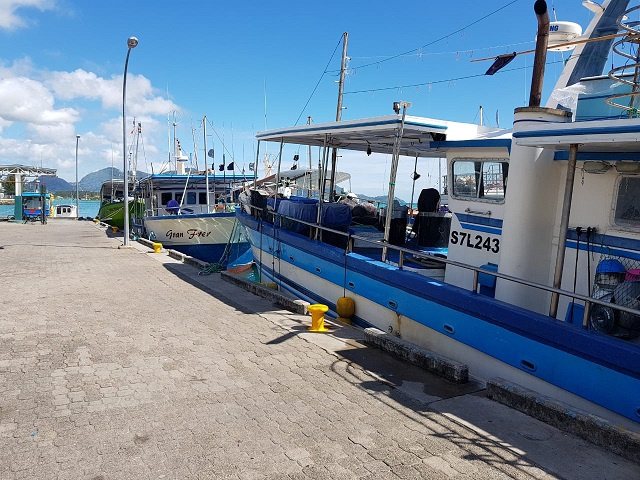 The new conditions include general provisions that establish which species can be caught, documentations that need to be kept. (Gerard Larose, Seychelles Tourism Board)

Recently released license conditions by SFA to which all boat owners should abide come in six parts. These include the general provisions that establish which species can be caught, documentations that needs to be kept in the vessels and notifications before leaving and coming back to port. There is also the requirement to have a Vessel Monitoring System (VMS) onboard each vessel and demarcated zones of exclusions.

SFA's monitoring, control and surveillance manager, Johnny Louys, told the press that most of these conditions were being practised but now they have been placed in a proper framework.

"In general, I think that people more or less understood what we were explaining. However, there are some contentious issues such as the exclusion zones. The reason why we have put this in place is to separate some of the different types of fishing, ensuring that they are not fishing in shallow waters, hence competing with small-scale fishers," said Louys.

Boat owners' greatest concerns were about the outlined exclusion zones where industrial fishing vessels will no longer be allowed to operate.

The chairperson of the Seychelles Fishermen and Boat Owners Association (SFBOA), Keith Andre, said what was evident in the meeting is that the regulations came out suddenly without consultations.

"It has been a long time since we have seen a CEO come before a group of fishermen to clarify certain issues. It is now up to us boat owners to comply as stakeholders but at the same time, there is something lacking in the way things were organised today. So as to encourage compliance, there should be consultations as compliance costs less than policing and enforcement," said Andre.

He added that "when everyone sees themselves in the decision-making process, it is easier for them to abide to the regulation and as such, it will cost the authority much less if they take this approach in the future."

The chief executive of SFA, Nichol Elizabeth, outlined that he and his team are ready to go back and form a small committee to fine tune this condition, to make sure that it is clear within which zones one can fish.  This is expected to take place in the coming week.

He added that "when it comes to fishing outside the EEZ (Exclusive Economic Zone) of Seychelles, we have outlined that they will not be able to do so if they do not have a certificate of authorisation."

"We have an obligation before IOTC (Indian Ocean Tuna Commission) and we cannot let our vessels be declared as illegal. We want those catching demersal fish, tuna and tuna-like to understand the conditions under which they need to operate," he added.

A representative from the fish processing and exporting sector, Louis Bossy, said, "What was discussed today was very important because if one of the boat owners does not respect one of the regulations put in place, we as exporters, we will be the ones to be punished."

"When I export a fish bought from a vessel that has not followed all these regulations, it is considered as IUU (Illegal Unreported and Unregulated) fish. When I export an IUU fish to Europe for example, and these guys backtrack the shipment, I might lose my license. SFA is basically putting things in order, preventing this from happening. It is therefore very important that boat owners, fishermen and processors are on the same page," Bossy explained.

A person looking to learn more about the new conditions under which these boat owners need to operate their vessels can contact SFA for a copy.

Fisheries is the second top economic contributor of Seychelles, a group of 115 islands in the western Indian Ocean, with an Exclusive Economic Zone of 1.4 million square kilometres.

Fisheries » Be a reporter: Write and send your article » Subscribe for news alert
Tags: Seychelles Fishermen and Boat Owners Association