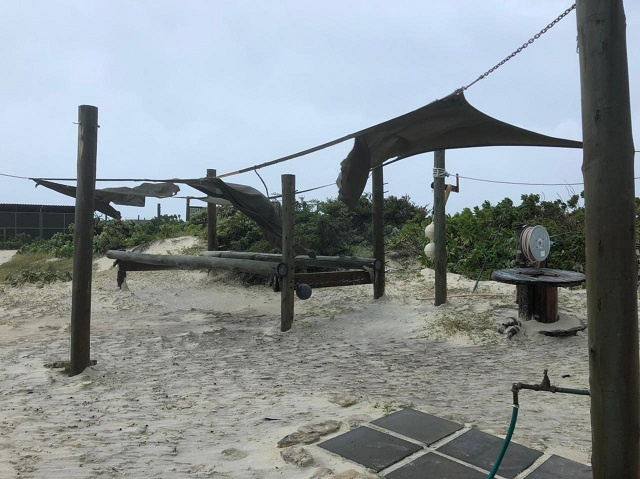 Savy said that some of the provisional buildings which are not cyclone proof on the Cosmoledo had been partly damage and its vegetation. (Islands Development Company)

Glenny Savy told a press conference that the islands were much better prepared for a cyclone compared to five years ago when the Fantala cyclone caused around $4.5 million worth of damages on Farquhar.

“On Assumption and Astove there are no major damages aside from the felling of some trees and torn roofs.On Cosmoledo we’ve suffered some damages… Some of the provisional buildings which are not cyclone proof on the island had been partly damage and its vegetation,” said Savy.

The United Nations Office for the Coordination of Humanitarian Affairs (OCHA) online news service on Wednesday warned that Jobo had formed over the south-western Indian Ocean and was moving west-northwest towards the eastern coast of Tanzania.

Savy said the cyclone passed to the south of Farquhar and continued towards Cosmoledo and Astove on Wednesday afternoon.

He said that Astove which is located 20 miles to the south of Cosmoledo also experienced heavy wind around the same time.

“On Astove there is an automatic weather station and they recorded wind gushing up to 150 km per hour. Since we had the cyclone hit Farquhar in 2016 we’ve ensured that our buildings are cyclone proof,” added Savy.

He said that “this time things were very much different compared to the last time when we did not have cyclone proof building. So we’ve seen that work we’ve been doing in the last few years have paid off.”

“Jobo was not a strong cyclone compared to the one that hit Farquhar which was at a speed of 300 km per hour. Although it had strong wind up to 130 km per hour it did not cause heavy damages. When it left Cosmoledo and Astove there was a lot of worries about Aldabra as it moved in that direction,” said the IDC CEO.

Frauke Fleischer-Dogley, the chief executive of the Seychelles Islands Foundation (SIF)  which manages Aldabra, told a news report earlier on Thursday that “my first report from the island manager confirmed that although the wind was strong it did not cause any loss as was expected.”

“According to the Met Office, the tropical depression has passed so around 8 am we lifted all restrictions and people could move out of the cyclone shelters and assess the damage,” said Fleischer-Dogley.

She said that it is important for SIF to assess if there is any damage to infrastructures and the species on the island.

Aldabra is one of the world’s largest atolls and home to a population of endemic giant Aldabra tortoises which fluctuates to around 100,000, more than the 98,000-person population of Seychelles, an archipelago in the western Indian Ocean.