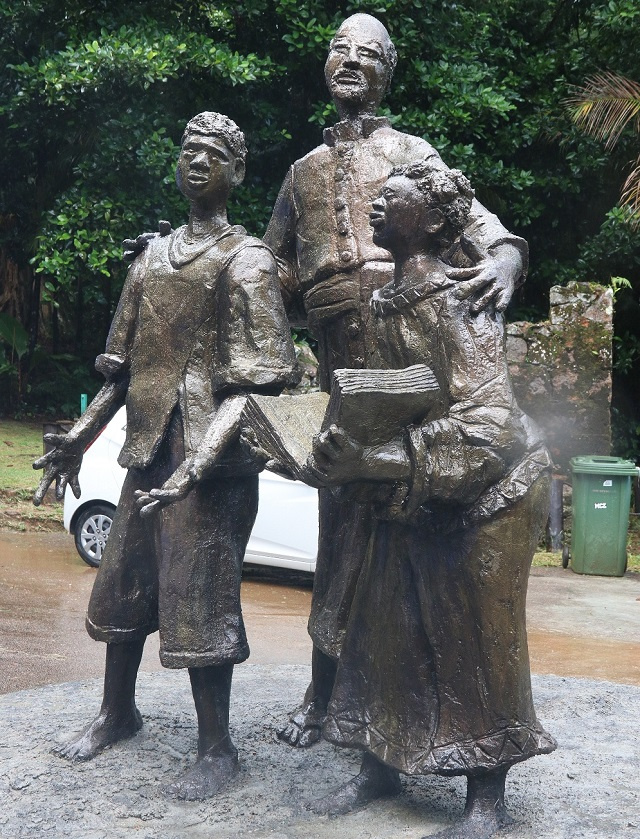 The monument depicts three sculpted statues of two liberated slave children – a boy and a girl - and a headmaster. (Seychelles Nation)

(Seychelles News Agency) - A new monument has been unveiled at Venn's Town – a heritage site that is referred to as the cradle and birthplace of modern education in Seychelles.

Venn's Town and the mission ruins at the Morne Blanc National Park located in the hills of the main island, Mahe, was set up in 1875 and was the beginning of a new era for people who had been captured and oppressed.

The freed Africans had a great impact on Seychelles in the formation of the Creole Seychellois identity.

"This activity that we are witnessing today provides us with an opportunity to reflect on the struggles, achievements and contributions that our forefathers made to create a better future," said the chief executive of the Seychelles Heritage Foundation.

Benjamine Rose added: "It is a powerful reminder of those who have in many instances made the ultimate sacrifice and given their lives so that others may attain their freedom."

The foundation which manages the site explained that the liberated slave monument is an artistic interpretation of the residents of Venn's Town industrial school which was built by the Anglican missionary. It was open from 1876 to 1889.

The monument depicts three sculpted statues of two liberated slave children – a boy and a girl - and a headmaster. It symbolises the significance of the site as a great contributor towards the growth of the Seychellois nation. The monument was sculpted by local well-known artist Egbert Marday.

The Mission Ruins of Venn's Town was established by the Christian Missionary Society and named after Henry Venn - an Anglican evangelist. It was a settlement with plantations of vanilla and patchouli amongst others,

The ruins consist mainly of traces of foundations of five buildings. The site also has a cemetery which was an extension to the original settlement where the liberated slave's children were buried.

The director general for culture, Julianne Barra, told SNA that Seychelles -115 islands in the western Indian Ocean – is still pushing to have the site declared a World Heritage site by UNESCO. Work started in 2017.

"We will need now to bring in a consultant, an expert who will review the dossier and make final amendments. The justification that we are using for this is the place has outstanding universal value lies in what it represents for the Seychellois nation," added Barra.