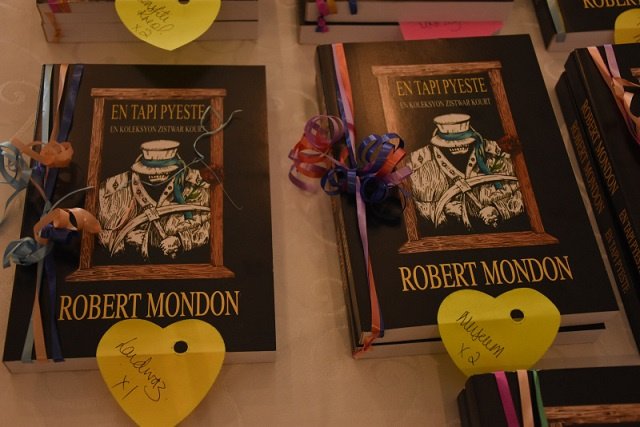 The book entitled 'En Tapi Pyeste' was launched on April 23 to coincide with World Book and Copyright Day. (Seychelles Nation)

(Seychelles News Agency) - Seychellois writer Robert Mondon has launched a collection of short Creole stories, a first publication made with the assistance of the National Arts and Culture fund.

The book entitled 'En Tapi Pyeste' – which means a patched tablecloth in English -- was launched on April 23 to coincide with World Book and Copyright Day.

En Tapi Pyeste is made up of short stories based on different themes including love, violence and substance abuse among others, and for this reason Mondon has advised that it is meant for mature readers.

Mondon, 43, has been writing for around 25 years and said he has a love for books since childhood, especially from listening to his father telling him stories.

"When I was much younger in the 20s, I started writing. The love for writing is in me but work, life problems eat away at your interest and finally you don't feel like doing anything. When I fell sick, I felt the need to leave something behind. And after all those years that I thought I had wasted, I realised I had amassed a wealth of experience and I just took to the page. To be frank, it came easy to me," said Mondon.

He said that there are spices in the stories that he has experienced or seen and also many are from what he has read.

Mondon said he did a collection of short stories because it "enables the reader to be able to complete a story in one sitting, maybe during breakfast or a coffee break. An easier way to encourage people to read more, with less commitment."

The Principal Secretary for Culture, Cecile Kalebi, says that "the fund is not only for artists but also for people who have cultural projects that would have a positive impact on society. It has to promote the Seychellois culture and heritage as well as promoting the development and growth of the culture. We are very happy to launch the first Creole book through this fund."

She added that for consideration under the funds, the focus is on projects that promote the Creole language and other art forms.

Arts & Culture » Be a reporter: Write and send your article » Subscribe for news alert
Tags: World Book and Copyright Day