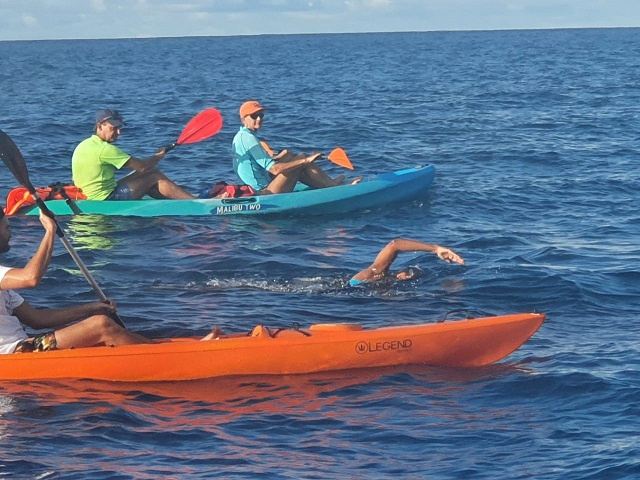 Passon took 4 hours 6 minutes to swim from La Digue to Praslin and back. (Neil Puresh)

Passon, the reigning local sportswoman of the year and a Tokyo Olympics qualifier, took 4 hours 6 minutes to swim from La Digue to Praslin, Seychelles third- and second- most populated islands, and then back to La Digue.

President Wavel Ramkalawan sent a message of congratulations to Passon for her amazing performance.

"It was really a challenge and was not easy at all. I had to mentally find the strength in my body especially in the second half from Praslin after the first hour and a half. It was really difficult for me as there were a lot of waves and I had to really fight against the current. But I managed to finish it and I am so happy," Passon told reporters.

Passon, whose mother hails from La Digue, had many people from the island up and ready to support her when she started at 6 in the morning until she returned.

"When I arrived at the finish line I saw all the people who had turned up to give me their support, I'm so emotional and overwhelmed. It is really incredible and I greatly appreciate all the support I got today," she said.

The Minister for Youth, Sports and Family, Marie-Celine Zialor who was also present on La Digue, said, "This is really mind over matter because if you are focusing only on your physical strength you will not be able to do it. The cause for the challenge also since she did it for mental health something which has been neglected in our country. So just the two things when I saw her coming back was enough to make us all emotional. She is making us dream that things that we think are impossible are possible."

Passon has qualified for the Olympic Games in Tokyo along with sailor Rodney Govinden and the Minister said that seeing her performance gave her hope that she can get good results at the Games.

"When I see her coming back, I thought of all the things that we want to do in sports and that many people are saying that Seychelles is small and it will be difficult. Today and one who had doubts here is the evidence and this gives us permission to dream and to make the youth dream about something positive," she added.

Zialor said that the mental health team behind Passon was also present and have been holding meetings on Praslin and will be looking at La Digue and they say that there is a strong demand for assistance.

Passon was accompanied on her swim challenge by her stepfather Neil Puresh by boat and sailors in Kayaks. Her mother Lydvine Passon and sister Charlotte stayed back to provide support on the ground.

The swim challenge coincided with a race of 21 km by Seychellois long distance veteran athlete Joel Melanie who is also raising funds for several associations. The race dubbed 'Anmenn mwan La Dig' was the first in a series of three. The second phase ‘Retourn Praslin’ is scheduled for June 26, while the last one ‘Mwa Retournen Victoria’ – has been planned for August 29 on Mahe, the main island of Seychelles, an archipelago in the western Indian Ocean.

No details were immediately given about how much funds had been raised.

Sport » Be a reporter: Write and send your article » Subscribe for news alert
Tags: Mind Over Matter, Olympic Games