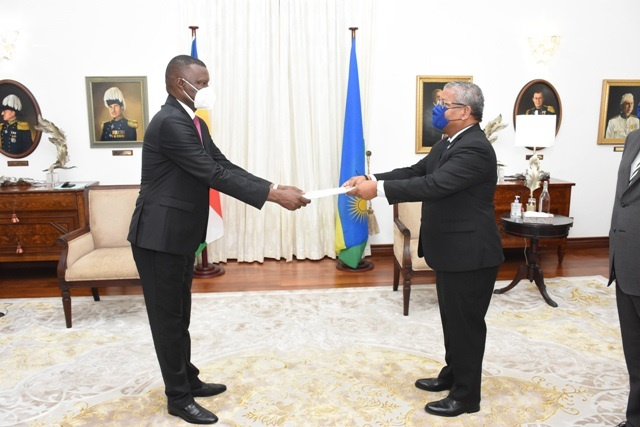 (Seychelles News Agency) - Tourism and education are two areas where cooperation is expected to be developed between Seychelles and Rwanda, the newly accredited high commissioner of Rwanda to the island nation said on Tuesday.

Major General Charles Karamba presented his credentials to President Wavel Ramkalawan at State House in the capital city of Victoria.

Karamba said the two countries enjoy very good relations and he added that Rwandan President Paul Kagame was amongst the first to congratulate Seychelles' head of state when he assumed power six months ago.

He told journalists that exchanges between the island nation and Rwanda will be in different fields but tourism is top on the agenda.

"Seychelles is highly developed in the tourism industry. Rwanda is doing a great job. There is a lot that we need to share to make sure that this sector of tourism development is to the highest level," explained Karamba.

In the field of education, Karamba hopes the two countries can learn and share expertise, especially where the French language is concerned.

Security is another possible area for exchanges especially with the Police force as Rwanda has a Police school.

The high commissioner also met with Vice-President Ahmed Affif and the two discussed the current situation due to the COVID -19 pandemic and its impact it has had on the economy.

"We discuss the current pandemic, and how we come out of this situation because the pandemic is here with us for a while, and our economies need to recover," added the high commissioner.

Karamba is the fourth Rwandan high commissioner to be accredited to the Seychelles – 115 islands in the western Indian Ocean -- since the two countries established diplomatic relations in 2006. He replaces Eugene Kayihura who was accredited in March 2017. Karamba will be based in Dar Es Salaam, Tanzania.

The newly accredited diplomat is also expected to meet with the Speaker of the National Assembly, the Minister for Foreign Affairs and Tourism, the Minister for Investment, Entrepreneurship and Industry, Dean of the Diplomatic Corps and the Seychelles Chamber of Commerce and Industry (SCCI).

Diplomacy » Be a reporter: Write and send your article » Subscribe for news alert
Tags: COVID -19 pandemic, University of Seychelles