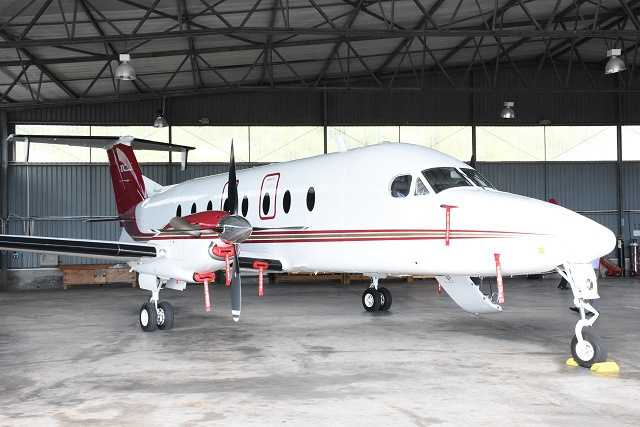 Dubbed S7-ALP after Alphonse, one of the islands managed by IDC, the newest addition is a Beechcraft 1900, the same model as two other crafts owned by the company. (Seychelles Nation)

(Seychelles News Agency) - The Seychelles' Islands Development Company (IDC) on Friday revealed a new addition to its aviation fleet to meet the continuous demands coming from clients and operators for flights to outer islands.

Dubbed S7-ALP after Alphonse, one of the islands managed by IDC, the newest addition is a Beechcraft 1900, the same model as two other crafts owned by the company.

The chief executive of IDC, Glenny Savy told the press that the acquisition is a big accomplishment for the company and will help greatly in meeting demand.

“When I first started working with IDC 40 years ago, we had to do long trips on boats regardless of the weather to reach the islands, and these were tough journeys. It was difficult for some youth to take up a career with IDC. I realised that aviation was key to our development,” said Savy.

He said that another aircraft was necessary as there are days when there are flights being operated to four different islands.

“To ensure that our clients get good service when they need it rather than when we are available, we decided to invest in the third Beechcraft. Even with three of these crafts, when the hotel on Platte island opens, it will not be enough and we will need to look further,” said Savy.

The company took a five-year loan with Al Salam bank to cover the cost of obtaining the aircraft which is made in America, though the manufacturing of this model ended in 2002. It cost about $2.5 million and IDC spent an additional $500,000 to improve and upgrade the craft.

IDC has 35 years of experience in aviation and for the first five years following the company’s creation in 1980 operations to outer islands depended greatly on Air Seychelles’ domestic service as IDC did not own any planes. Air travel brought tourists to Desroches following the opening of the hotel on the island while military planes operated other flights for IDC.

In 1985 the company bought its first plane, a Cessna Caravan 2 (F406) that could board up to 10 passengers. In the following years, IDC bought its second craft, a Caravan F406.

IDC obtained its first Beechcraft 1900 in 1998 with financing help from the government and in 2018 the company bought its second Beechcraft.

The third Beechcraft has the capacity to take up to 19 passengers on short flights and from 10 to 16 for longer ones, the same as the other two aircraft.

The general manager of aviation at IDC, Marcus Labrosse, said that “we choose this kind of aircraft as we have seen that it adapts better with the types of operations that IDC carries out, especially since our outer islands are scattered in the western Indian Ocean between 120 to 1,100 kilometres from Mahe.”

He said that in aviation operations when a company has the same plane model in its fleet, it brings several benefits which include the facilitation of maintenance, storage and importation of spare parts. It also reduces training costs for pilots.

“Even if IDC would like to have the same model of craft in its fleet, this is really difficult as there are certain islands that are small and this means that runways are shorter. For this, we need a plane that can land and take off in that small space. This is why IDC has no other choice but to invest in an islander craft really soon for such operations,” said Labrosse.

The CEO of IDC said the company is currently negotiating with the government to get extra areas to build new hangars and offices at Pointe Larue.

“If we can achieve this, we will be able to step up our game, and instead of Beechcraft, we will start investing in ATF-42, which is another type of aircraft that will bring about another dimension in development. It will not only be utilised by IDC but also meet our national security, medical and emergency needs,” he said.