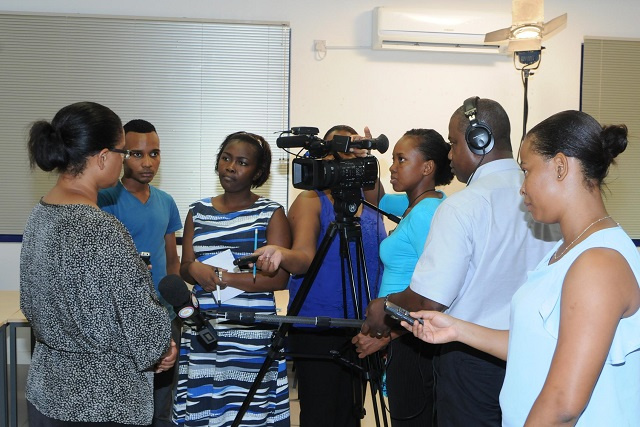 The report highlighted that the media, especially the privately-owned media, have managed to develop in recent years. (Patrick Joubert)

(Seychelles News Agency) - Seychelles has improved its ranking in the World Press Freedom Index for a third consecutive year, climbing 11 spots to 52nd out of 180 countries.

The index, which is compiled through a survey, is published by Reporters Without Borders (RWB), a Paris-based non-governmental organisation. The release of the rankings coincides with World Press Freedom Day on May 3, a date that celebrates the fundamental principles of press freedom around the world.

The report highlighted that "although media pluralism and funding are limited by this small archipelago's size and population, the media, especially the privately-owned media, have managed to develop in recent years."

The chairman of the Association of Media Practitioners Seychelles, Rassin Vannier, said that the report reflects the progress that Seychelles has made in the past few years in terms of press freedom.

"However, there is still a lot to be done. Here in Seychelles, the media tends to be influenced by social media and we should do everything possible to keep our independence," said Vannier, who is also the chief editor of the Seychelles News Agency.

The index ranks regions according to the level of freedom available to journalists and is a snapshot of the media freedom situation based on an evaluation of pluralism, independence of the media, quality of legislative framework and safety of journalists in each country and region.

Despite Seychelles showing positive progress in press freedom, the report says that threats to press freedom come mainly from laws with provisions that can obstruct reporting. It gave the example of the access to information law adopted in 2018, which has many exemptions freeing public officials from any obligation to provide information when national security or the country's economic model is concerned.

The report added that penalties are rarely imposed on the media in Seychelles but when they are they can be heavy.

In 2020, an independent newspaper was ordered to pay more than 23,000 euros in damages in a defamation case for an article written in 2016.

Vannier said that AMPS is still lobbying the authorities to change this law in order to further improve the ranking of Seychelles, an archipelago in the western Indian Ocean.

To coincide with the World Press Freedom Day on Monday May 3, the Association of Media Practitioners Seychelles (AMPS) in collaboration with the French Embassy in the island nation organised a workshop focusing on fake news and its impact at the Club Med establishment on Ste Anne. During the workshop, all journalists signed a chart on best practices.

On a global scale, the World Press Freedom Index reported that "self-censorship reflexes inherited from decades of communist single-party rule and close control of the media are gradually dissipating and giving way to a broader range of opinion and more editorial freedom."

It added that the public media are increasingly freeing themselves from the state's previously tight grip on their editorial policies and no longer hesitate to criticise the government.

For some time now, no journalist has been the target of abuse, said the report, but a local journalist, Antoine Laporte, disagrees and said abuses against journalists are not being reported.

"Nevertheless, I would agree to say that journalism in Seychelles is growing in the sense that freedom of the press is gradually improving," said Laporte.

Laporte said there is still a reluctance from the government in terms of giving out information to the press. When they are willing, depending on the department, it can take a long time. Another hindrance that Seychelles needs to overcome is on the part of the people, who still hesitate before expressing opinions to the press, although people are opening up more, Laporte said.

"As for the private sector, although most are cooperative, a number of organisations seldom ever cooperate with journalists. Also, there are cases where media houses obstruct certain stories from being published," said Laporte.