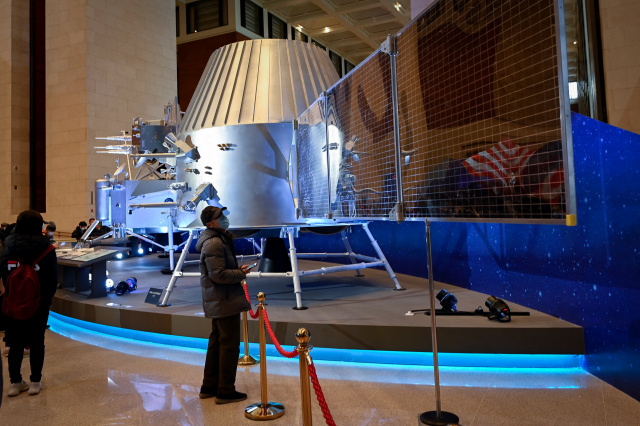 A man looks at a model of a lunar orbiter from China's lunar exploration program Chang'e-5 Mission during an exhibition at the National Museum of China in Beijing on March 4, 2021. (WANG Zhao / AFP)

(AFP) - The Pentagon said Wednesday it is following the trajectory of a Chinese rocket expected to make an uncontrolled entry into the atmosphere this weekend, with the risk of crashing down in an inhabited area.

US Secretary of Defense Lloyd Austin is "aware and he knows the space command is tracking, literally tracking this rocket debris," Pentagon spokesman John Kirby said.

China on Thursday launched the first of three elements for its space station, the CSS, which was powered by the Long March 5B rocket that is now being tracked.

The body of the rocket "is almost intact coming down," Kirby said, adding that its re-entry is expected sometime around Saturday.

After its separation from the space station module, the rocket began to orbit the Earth in an irregular trajectory as it slowly lost altitude, making any predictions about where it will re-enter the atmosphere or fall back to the ground nearly impossible.

It could end up breaking apart upon entry, with only smaller debris bits falling to Earth -- and even if the rocket falls from the sky mostly intact, there is a good chance it will just splash down into the ocean on a planet made up of 70 percent water.

But neither of those outcomes is certain, and there is a chance the rocket could crash land into an inhabited area or onto a ship.

Kirby said it is "too soon" to know whether any action, such as destroying the space debris, can be taken if human-occupied regions are threatened.

"We're tracking it. We're following it as closely as we can," he said. "It's just a little too soon right now to know where it's going to go or what, if anything, can be done about that."

It is not the first time China has lost control of a space craft as it returns to Earth. The space laboratory Tiangong-1 disintegrated upon re-entry into the atmosphere in 2018, two years after it had stopped working, though Chinese authorities denied they had lost control of the ship.

General » Be a reporter: Write and send your article » Subscribe for news alert
Tags: US, China