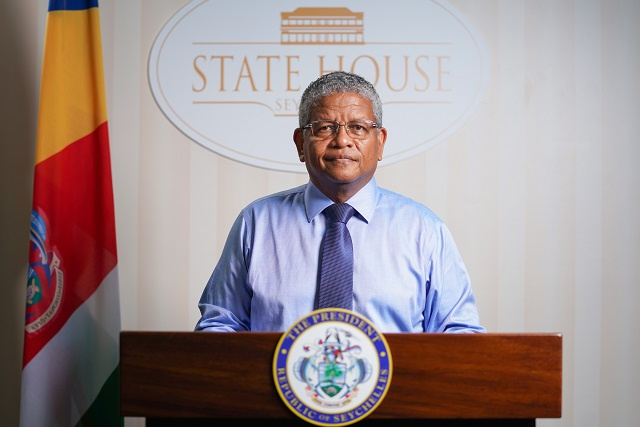 The head of state was addressing journalists from various media houses in a live presidential press conference through the platform Zoom on Thursday. (State House)

(Seychelles News Agency) - Diversifying the economy with an emphasis on the agricultural sector remains a priority of Seychelles' government, the head of state said in a live presidential press conference held over the conferencing platform Zoom on Thursday.

The development of the island nation's fisheries and agriculture sector is something that Ramkalawan said he is following closely.

"On the diversification of the economy, we are doing a lot of work. In terms of fisheries, we have a big area where we are doing all installations so that we can do a fish processing area and I hope by the end of this year or next year we would have finished with its set-up," said the president in his second news conference since his election in October.

Ramkalawan added that for agriculture - especially on the outer islands – there is huge potential not only for crops but livestock as well.

"I am following closely the development of agriculture on Coetivy. For example on Coetivy we would be able to return to the position where we are producing a parent stock so that we can produce eggs that can be hatched so that we can get one-day-old chicks that we currently do not have in the country and that we need to import," he said.

The president added that Islands Development Company which manages the outer islands is also looking at the production of pork, vanilla and prawns though only for local consumption.

On the issue of COVID–19, the president said that the virus is a real obstacle, however, he noted that the government is committed to its containment and treatment.

"At the coast guard's base we are building a centre where we can admit people. We are doing all the improvements and hope that in the next week we can establish same as another facility," explained Ramkalawan, adding that a medical oxygen plant is also being commissioned in the next day or two to ensure ample supply for patients in need. The head of state also appealed to all Seychellois to take their responsibility and to show solidarity in the fight against the pandemic.

The president explained that the government currently has a deficit of $200 million in its national budget and that discussions are still ongoing with friendly countries and the International Monetary Fund.

It was with a great sense of pride that Ramkalawan said that the island nation has regained ownership of  Air Seychelles - the national airline. However, the head of state said money is still owed to shareholders.

"Yes, we have debt with Etihad. As of today we owe them $20 million, we are negotiating to see how we can pay this and with the bondholders, they are not interested to negotiate any big discounts, and we are negotiating," explained the head of state.

The president also spoke on the ongoing restructuring within the government and the need for the public sector to adopt the result-based management approach.