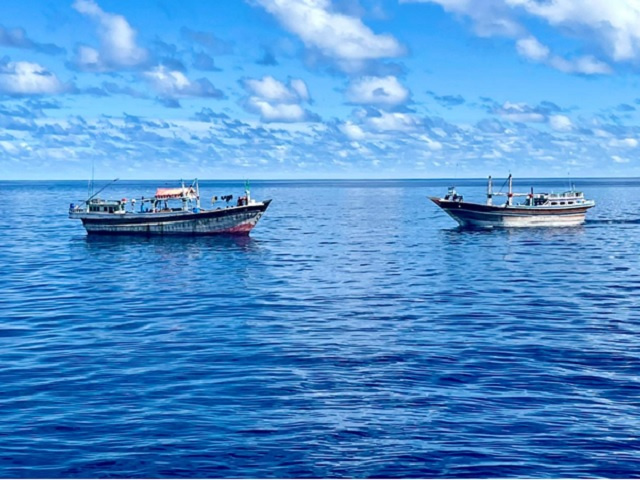 The two vessels were spotted by a routine patrol of the Seychelles Air Force on Tuesday in the Exclusive Economic Zone (EEZ) of Seychelles. (Seychelles Coast Guard/Police)

(Seychelles News Agency) - Two dhows have been intercepted in the Seychelles' waters on suspicion of illegal fishing, the Seychelles Coast Guard and Police said in a joint communiqué on Friday.

"On the same day, two Seychelles Coast Guard patrol vessels PS Topaz and PS Etoile were deployed and the two dhows were intercepted around 180nm North West of Mahe," the communiqué added.

The two Dhows which are suspected of being involved in illegal fishing inside Seychelles' waters are being escorted closer to Mahe, the main island, for further investigation by Seychelles authorities.

The communique said that "officers of relevant authorities have boarded the two vessels to carry out their investigation. Public health guidelines and protocol will be observed and adhered to by the officers involved in the boarding and conduct of investigation on board the said vessels.”

Officials did not release information on the number or nationality of the crew members.

Seychelles, an archipelago in the western Indian Ocean, has a vast EEZ of 1.4 million square kilometres which is slightly larger than South Africa and about six times the size of the United Kingdom. This presents a challenge when it comes to monitoring illegal activities in the island nation's waters.

Last year, the National Assembly approved an amendment to the Defence Act giving new powers to the Seychelles Coast Guard to fight illegal activities in the island nation's waters.