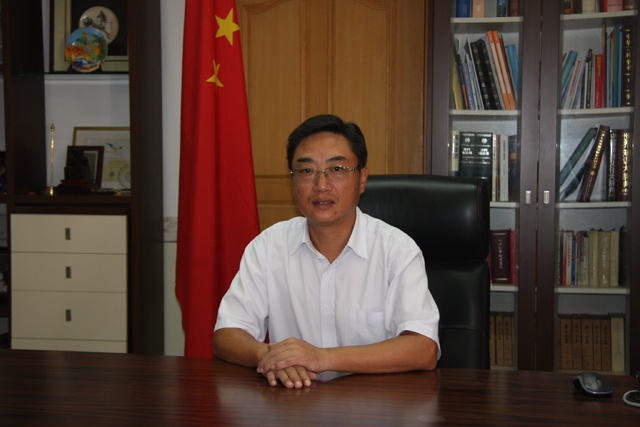 Shi Zhongjun is leaving Seychelles after serving a three year mandate as the Chinese Ambassador to Seychelles. (Chinese Embassy)

Today, Seychellois of Chinese origin forms part of a large community, and are represented in all sectors of society.

Over the years, Seychelles and China have developed cooperation in various fields namely tourism, health, education maritime security amongst others.

As the Chinese people commemorate the 65th anniversary of the founding of the People's Republic of China, today October 01, SNA presents an interview with the outgoing Chinese Ambassador to Seychelles.

Shi Zhonhjun was accredited to the island nation in 2011 and at the end of his three year tenure he talks about his mandate, his accomplishments while posted in Seychelles as well as relations between the two countries.

SNA: How would you describe the time you have spent here?

Shi Zhongjun:I think it’s a fruitful 3 years and a very happy 3 years. It’s been fruitful in terms of work cooperation with the Seychelles government and the different departments. My colleagues and I and the two governments have done a lot in cooperating in different fields. In terms of life I’ve had a very happy life here. Seychelles is a beautiful place with very friendly people and I feel very lucky to have been posted here. Unfortunately, I have to move on. But if I had the chance to choose I would definitely choose to stay longer, or if I have the chance to choose I’d choose to be posted here again but according to my assistant it’s almost impossible to be posted here again. But I will definitely come back in my personal capacity as a tourist, as a friend of Seychelles.

SNA: Is Seychelles the only African country where you have been based as a diplomat for your country? Is it your first posting in a tropical country?

Yes. This is my first posting in an island state. It’s also my first posting in an African country and I feel very lucky. Since I was a young diplomat at the foreign ministry I have always dreamt of being posted in an island state with beautiful beaches. But to be frank, at that time I did not know about Seychelles. I’ve heard a bit about the South Pacific Island. I had the dream of my life to work there. Luckily enough I was given this posting here in Seychelles, a beautiful island. The dream then and being here now is the same if not even much better.

SNA: What is your opinion on the development of Seychelles upon your departure...in comparison to when you arrived here?

Shi Zhongjun:I will not talk about the statistics. I will just give two examples. One example is the cars here. When I first arrived there was almost no traffic jam. The traffic flow was so smooth. But after three years here I see so many cars and so many good cars too. So this means the people now have become rich after three years. They have money now to do these things to buy the car. In terms of economic and social development Seychelles has improved. Another example is that after three years I see many new hotels have been built. So this is another example of the development of Seychelles.

SNA: During your mandate there has been a lot of cooperation between China and Seychelles such as the donation of the patrol vessel, the Anse Royale Hospital and the ‘Palais de Justice’. How would you describe the relationship between Seychelles and China?

I think the relationship between our two countries will further develop politically and economically since now we have found new areas to cooperate further besides tourism. As you know, the Chinese market is now one of the main markets for Seychelles tourism. It’s developing very quickly and has already become the fourth or fifth market of the Seychelles.

SNA: What would you say has been your most successful mission while posted in Seychelles?

Shi Zhongjun:I cannot distinguish the most successful mission but I am very satisfied with several missions here. But the biggest accomplishments are perhaps the ‘Palais de Justice” and the Anse Royale hospital. I’m also very satisfied that we’ve successfully completed the new patrol boat. Now everything is okay including the training for the officers. So the boat is now under the control of the Seychellois soldiers. As we speak the vessel is fully operational.

In other fields we have the Seychelles China Day. The Chinese association together with the Ministry of Culture has organised the first Seychelles China Day. It is a very big event. We also opened the Confucius Classroom at the University of Seychelles so that many more Seychellois can learn the Chinese language and more about the Chinese culture. We are also very glad to have contributed to the National Day celebration of Seychelles for example, last year we had the naval soldiers who took part in the National Day parade. This year we had two teachers here to teach mass performance to the students.

Besides those big projects, in these 3 years that I have been here, my colleagues and I have also done some work at district level. We helped to build bus shelters and retaining walls. We even helped some individuals to repair some things. This gesture which is ongoing was welcomed by the districts.

SNA: What is your most memorable moment in Seychelles?

Shi Zhongjun:Last time we helped the children of Ile Perseverance by building a playground there.  We went there for the opening of the playground. After the ceremony we opened the door and all the kids went in and played happily. I stood there feeling very very happy. That is the moment I really enjoyed.

SNA: How have you adapted living in a small island nation compared to China?

Shi Zhongjun:It was easy to adapt. There is more fresh air than in China. There are more beautiful sceneries and the atmosphere is much more laid back. The country is very small not as vast as China but of course our focus here is work. We are not tourists here, so every day we have lots of work to do here.

SNA: How would you describe the relations between China and the African continent and why is China interested in investing in Africa?

Shi Zhongjun:We share very good relations with almost all of the African countries and in the past decade the relationship between China and Africa has developed very quickly, not only politically but also economically. As you know there are many Chinese investments in Africa.

SNA: Now that you have come to the end of your mandate, what’s next? Are you going to be posted in another country?

Shi Zhongjun:I’m going back to Beijing to work in the Foreign Ministry for a while. After that I will be posted to another country. I’m not the one who decides where I will be posted next. My successor will be a lady. She’ll probably arrive in November.

SNA: Your hopes for Seychelles!

Shi Zhongjun:The first Seychelles-China day was off on a good start. I hope it continues and becomes a traditional cultural event with the Chinese community and the help of the Ministry here. This is a chance for the Chinese people to show their culture and promote understanding between the two people.

SNA: Nowadays more Chinese visitors are coming to Seychelles and discovering about Seychelles. Do you think we can say the same vice versa?

Another thing is that we send or provide opportunities for a lot of Seychellois people to go to China to study or receive training there. So every year we have around 10 people who go to china to study at Universities there. Every year we also have around 70 or 100 people who go to china to receive training in different fields. In China more efforts are also being done for more Chinese people to come here.

In the past three years the number of Chinese tourists’ arrival to Seychelles has increased so quickly. In 2011 when I came here it was about 2000 people. This year by the 14th of September it had already reached 10,000.  So by the end of this year technically it will have reached like 12 to 13 thousand tourists and next year more. It has almost doubled every year. I’m predicting another big increase. Let’s say in the next 3 to 5 years I think China will have come to the top of the Seychelles tourists market. So based on that, the airlines will be very interested to operate direct flight here.

The Seychelles government has also made good effort to market Seychelles in China. So now more and more people in China know about Seychelles. In China we have a big market every year. This year we will have one hundred million Chinese travellers so if we can have a small percentage of these people to come to Seychelles that would be great.

The Interview » Be a reporter: Write and send your article » Subscribe for news alert
Tags: China, Shi Zhongjun, Chinese Ambassador