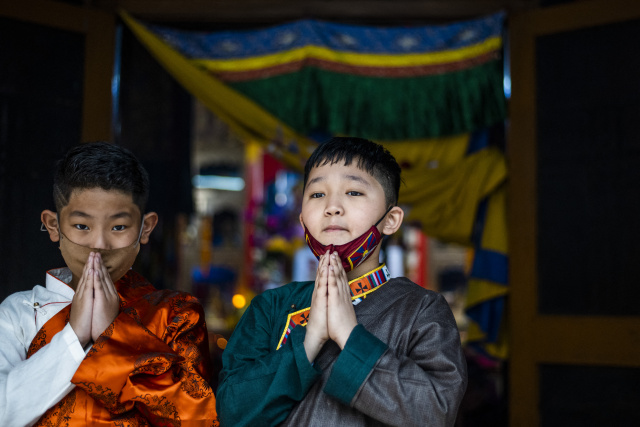 Tibetan refugee children offer prayers at a temple in New Delhi on February 12, 2021, during the first day of the Lunar New Year, which ushers in the Year of the Ox. (Jewel SAMAD / AFP)

(AFP) - China's population has grown at its slowest pace in decades, reaching 1.41 billion, census results showed on Tuesday, highlighting fears of a looming crisis over an ageing society.

The growth of 5.4 percent was the slowest since the 1960s, due in part to falling birthrates and a sharp drop in the number of working-age people.

China remains the world's most populous nation -- but its neighbour India is catching up with around 1.38 billion people, and its youthful population is expected to overtake China in the near future.

After nearly 40 years of a controversial "one-child" policy, Beijing in 2016 allowed families to have two children as fears grew about China's shrinking workforce.

China imposed the policy in the late 1970s, forcing couples to have only one baby in a dramatic effort to slow rapid population growth.

But the relaxation of the rule is yet to produce the expected baby boom to help stall a demographic slump in a country which is getting old fast.

"The census not only confirmed rapid population ageing, but also sustained low fertility," said Wang Feng, professor of sociology at the University of California, Irvine.

"At that low a level, the population cannot sustain itself."

The demographic shift in China has significant economic and political implications for the world's second biggest economy.

The surging number of elderly would challenge Beijing to spend more on healthcare and pensions, said Wang, and "justify its legitimacy by providing the basic social benefits."

Falling marriage rates in recent years have played out in slower birth rates, as have rising costs of living and increasingly empowered and educated women delaying or avoiding childbirth.

China's gender balance has also been skewed by the one-child policy due to a centuries-old social preference for boys which prompted a generation of sex-selective abortions and abandoned baby girls.

The latest census data showed the country still has 34.9 million more men than women, making up just over 51.24 percent of the population.

In the near term, Ning said the coronavirus pandemic had also discouraged couples from having children.

Covid-19 "increased the uncertainty of everyday life and increased worries around hospitalised childbirth," he added.

In a stark sign of changing Chinese society, the urban population grew by 236.4 million.

However, nearly 500 million are now working in places other than their official household registration, known as the hukou, which can make it harder for families to access schools or healthcare.

Yun Jiang, editor of China Neican at the Australian Centre on China in the World, told AFP that Beijing has already "moved to a more 'pro-birth' direction" because it needs a large population to sustain its international influence.

China is trying to remove barriers against having children and promote conservative social attitudes "such as shaming single women and penalising working women", she said.

The country conducts a census every decade to determine population growth, movement patterns and other trends, and the politically sensitive data plays a major role in government planning.

The 2020 survey was completed in December with the help of more than seven million volunteers and for the first time much of the census data was collected online.

US-based academic Yi Fuxian, senior scientist at the University of Wisconsin-Madison, speculated China's population was already an over-estimation and began to decline in 2018.

The 2020 census data is designed to avoid a "political earthquake" but will lead to policies being "based on the wrong population data," he said.

The topic exploded on Chinese social media and discussions quickly racked up more than 900 million views.

Some cast doubt on the reliability of the data, while others pointed out the rising challenges and costs of modern-day China.

"Life itself is not easy," complained one.

"Isn't it good for ordinary people to take responsibility for society and themselves by choosing to delay the next generation?"

General » Be a reporter: Write and send your article » Subscribe for news alert
Tags: China, population