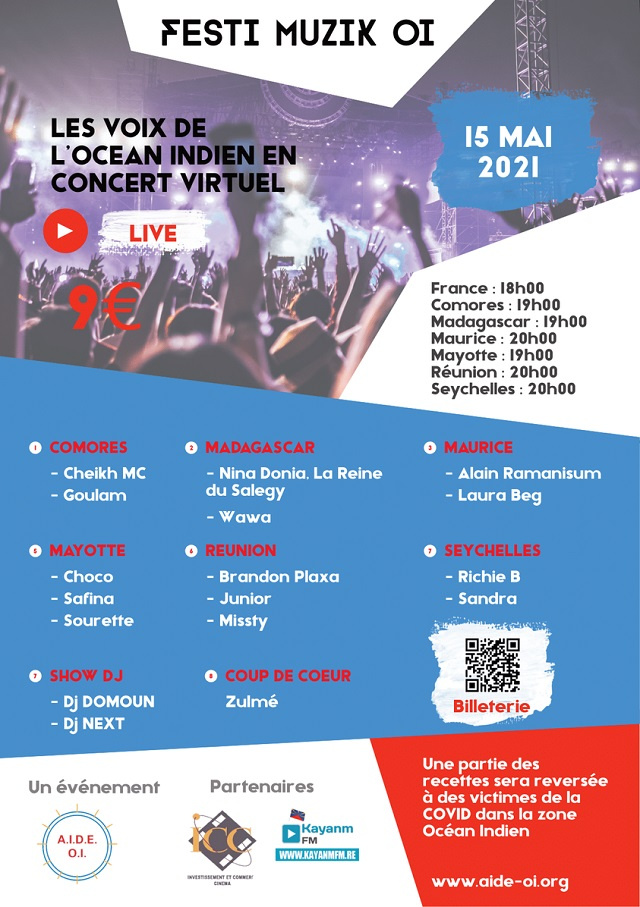 (Seychelles News Agency) - Two Seychellois singers will join others from the Indian Ocean in a virtual music festival on Saturday, May 15, that will dedicate part of the funds raised to COVID-19 victims in the region.

The event will see the participation of 17 artists including Alain Ramanisum, Goulam, Choco, Wawa, and Brandin Plaxa, hailing from Comoros, Madagascar, Mauritius, Mayotte, Reunion and Seychelles.

Representing Seychelles are Richie B and Sandra, two artists that are well known regionally for their music. Both artists told SNA that the music festival is a great opportunity for them.

"The song that I sing with Sandra - 'Sorti ale' - as well as my solo one 'Dimoun i koz ou' are quite popular in the Indian Ocean. When I got the call to take part in the festival, I realised that the islands of the Indian Ocean are determined to see me perform. Before this, I thought that aside from Seychelles, my songs were hits only in Mauritius and Rodrigues. I didn't know that people from Reunion knew about my music, so this is a great opportunity," said Richie B.

On her side, Sandra said that this is the first paying virtual show that she will be part of in the region.

"The biggest advantage is the fact that we will not be mingling with large crowds, hence putting ourselves at risk. However, the disadvantage is due to the fact that I am used to performing before a crowd, and without them, it will not be the same but I am trying to adapt to the new normal. I am looking forward to Saturday. And as it is a paid event, people will need to buy a ticket in order to watch the show," said Sandra.

Interested persons can purchase their tickets for the show on AIDE Ocean Indien's website or on weezevent.com at a cost of £9. Organisers outlined that this brings an advantage for each household as for example, a family of five can watch the show by buying only one ticket.

The link and access to the concert will be sent to all those who have bought a ticket by email two hours before the event. In Seychelles, an archipelago in the western Indian Ocean, the two-and-a-half hour show will air at 8 pm.

Money collected from ticket sales will be used in three different ways. A part will go to families of COVID-19 death victims from the six Indian Ocean countries. The other two parts will be split between artists and the association, so as to fund future projects, the organisers said.

The event coordinator for Seychelles, Patel Esparon, told SNA that the two Seychellois artists will each be performing for 10 minutes during 'Festi Muzik Océan Indien'.

"As Sandra and Richie B have a song that they sing together, we have decided to have them sing it. Other than that, both artists will be performing two other songs each. This show allows Seychelles to be present on the music front in the Indian Ocean during this abnormal' time," said Esparon.

"The money that has been allocated to us does not allow us to perform with a band, and hence we decided to do it in a studio in an acoustic setting. Sandra and Richie B will be performing with two musicians - Ruben on the keyboard and Danny Jules will be playing the guitar," he continued.

During the interview with SNA, Richie B outlined that "under the contract that we have signed for the virtual show, once things get back to normal, we are expected to hold a live concert in Reunion. Though we are not sure exactly when this will take place due to COVID-19, we now have a link with Reunion."