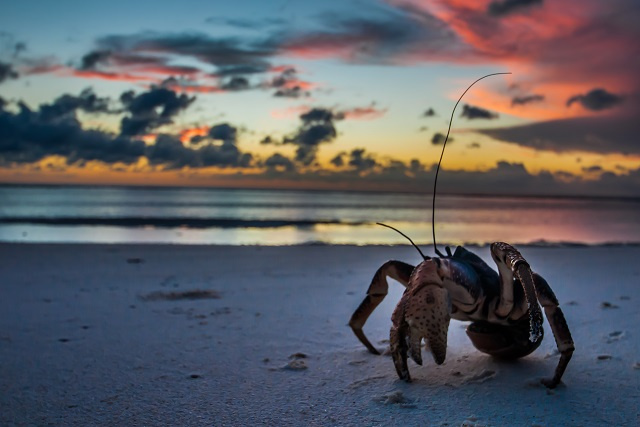 (Seychelles News Agency) - New research conducted on the coconut crab found on Seychelles' remote Aldabra Atoll shows that the population of the species is stable because the atoll provides a good refuge.

The research on the population dynamics of the coconut crab, whose scientific name is birgus, confirmed that Aldabra Atoll hosts a large population of the species.

Over the last few decades, coconut crab populations have suffered a dramatic decline worldwide mainly due to habitat loss and overharvesting for food.

Using one of the longest continuously recorded data sets on the species, the research describes for the first time the structure and dynamics of the protected population of coconut crabs from Aldabra. The results confirm that the UNESCO World Heritage Site is an important refuge for coconut crabs in the Indian Ocean thanks to the atoll's decades of strict protection.

The coconut crab is the largest terrestrial invertebrate in the world and can reach over one metre in leg span and weighs up to four kg. Aside from their impressive size and force, coconut crabs are also known to play important ecological roles in island ecosystems.

"Coconut crabs are known to play important ecological roles in island ecosystems where they exist. They are scavengers so they remove rotting material and help to decompose leaf litter, and their consumption of seeds and seedlings controls plant numbers," said, Jennifer Appoo, the report's lead author.

Appoo, a former project coordinator at the Seychelles Islands Foundation (SIF), added that "coconut crabs also actively hunt, suggesting they may function as top predators on islands. Their burrowing activities contribute to soil aeration and juvenile coconut crabs are a source of food for birds. Through these roles, coconut crabs maintain key ecosystem functions and are therefore important to conserve."

Throughout the study, the density and sizes of male and female coconut crabs varied with different parameters such as the distance from the coastline, the season and the moon cycle.

Male coconut crabs exhibited bigger sizes compared to the females, and male and female coconut crabs shed their shells at different times of the year and the reproductive season is during the Seychelles' wet season between December and March and in synchrony with the moon cycle.

The large population suggests that the island may potentially provide a natural source population for other areas in the region.

According to SIF, healthy populations of coconut crabs are known to persist in few locations where they are being actively protected, and in Seychelles, an archipelago in the western Indian Ocean, coconut crabs have been historically overexploited for food.

A study conducted over nine years on coconut crabs on the island of Picard on Aldabra was able to determine the status and ecological characteristics of the population on the atoll.

Appoo said that "long-term studies on unharvested coconut crab populations are limited and this research provides valuable information on the species' behavioural patterns in the absence of human influences".

The authors of the research recommend similar long-term studies on other coconut crab populations to improve knowledge on the species and to support conservation actions to halt the decline of this remarkable invertebrate species.