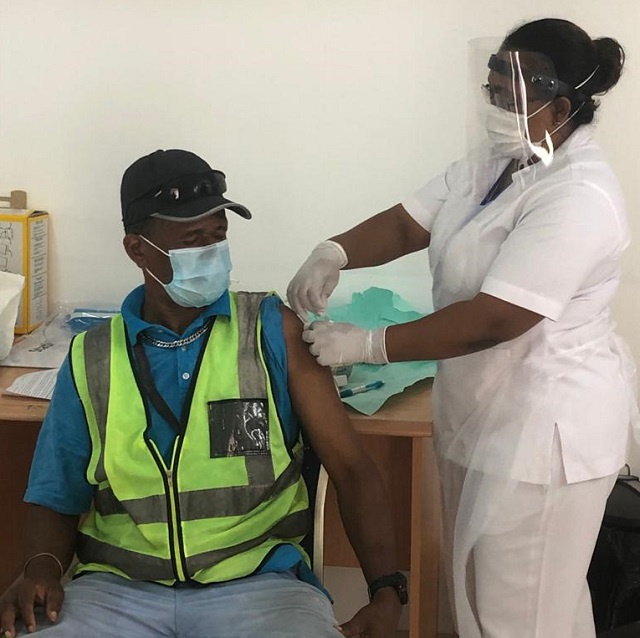 A total of 69,708 people out of the target population of 70,000 has received the first dose of either Sinopharm or Covishield, amounting to 99.6 percent of the goal. (Seychelles Nation)

(Seychelles News Agency) - The Seychelles' health authority is convinced that the COVID vaccines being administered to its population are effective, a top official said Thursday.

The Public Health Commissioner, Jude Gedeon, told a press conference that so far the island nation has not registered a case where someone who had both doses has passed away.

"What people are not realising is that if we had not reached the vaccination rate we are now, our situation would have been much worse," he said.

Seychelles currently has 2,739 active cases of COVID-19 and has recorded 32 deaths.

A total of 69,708 people out of the target population of 70,000 has received the first dose of either Sinopharm or Covishield, amounting to 99.6 percent of the goal, while 61,360 people have received both doses.

The island nation in the western Indian Ocean rolled out its vaccination programme in January. The health authority has confirmed that it has not excluded a possible booster shot for Sinopharm but that will be based on the guidance from the World Health Organisation.

The Public Health Commissioner also announced that very soon the Russian-made Sputnik vaccine will be rolled out now that Seychelles has received information on its certificate of analysis.

Gedeon said that the Sputnik vaccine is stored at -18 degrees Celsius and once it is defrosted has to be administered within two hours. This will mean that the vaccine will be administered on the main island of Mahe only.

The chief executive of the Health Care Agency, Danny Louange, said that the "priority will be health workers who have not been able to take other vaccines and other essential workers. This will be done by appointment as the vaccine has a very tight cold chain that we have to maintain. So will we know exactly how many people will be vaccinated at a given time. We will announce very soon."

On the increase in COVID cases despite the high vaccination rates, Gedeon said that this came up in a WHO press briefing in Geneva.

"WHO said that if necessary, they will relook at everything and we have already done the groundwork for a new assessment to find out what is going on. We have some ideas but when you have international people looking at it, it makes it transparent," said Gedeon.

He added that more samples are being taken to send for testing in the coming days to ascertain if there are any other variants in the island nation.