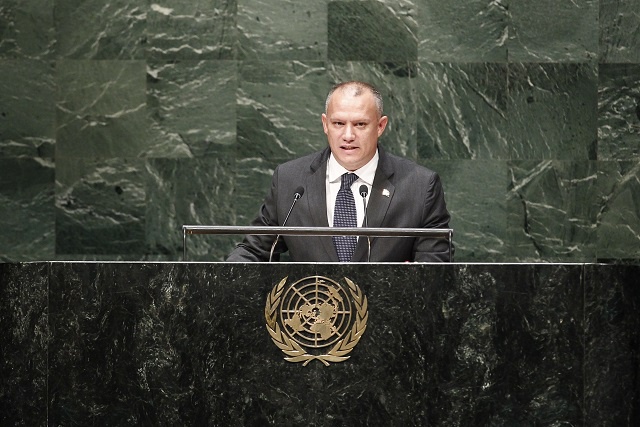 (Seychelles News Agency) - The Seychelles Foreign Affairs Minister, Jean Paul Adam has used his address at the general debate of the 69th session of the United Nations General Assembly in New York on Monday, to highlight the relevance of the United Nations process in addressing issues of peace and development which the world faces today.

In a press statement issued this morning, the Ministry of Foreign Affairs said Adam called for “commitment to multilateralism through the UN while also ensuring that we accord the highest priority to more inclusive and effective development.”

The Minister also took the opportunity to reiterate Seychelles’ commitment to push forward the agenda of small island developing states (SIDS) in the wake of the UN conference on SIDS held in Samoa at the beginning of last month.

Pushing forward proposals made by the Seychelles President James Michel at the Samoa conference to have a vulnerability index for SIDS, Adam noted that an effective vulnerability assessment tool would also improve development options for all states and not just small island developing nations.

“The priorities, which Seychelles is championing, include the need for a vulnerability index as a more effective tool to measure the development of SIDS; the innovative debt for climate change adaptation swap to address the debilitating debts of SIDS; and the Blue Economy concept,” said Adam.

The Minister described the blue economy as shared opportunity for all developing nations to make better use of their oceanic spaces.

Seychelles' initiative to conclude 'debt for climate change adaptation swaps' with the aim of overcoming the problem of access to resources for middle income SIDS and as a meaningful contribution towards climate change resilience and hope that there will be a legally binding agreement on climate change was also highlighted.

“We call on all partners to make sure that the upcoming conference of parties that will meet in Lima, Peru sets the stage for concluding an agreement in Paris 2015,” said Adam in his address.

Maritime security, peace and security in Africa and the Indian Ocean region, the Ebola epidemic in West Africa and the threat it poses to the world were also underlined.