No respite from Israel strikes, as diplomatic efforts intensify 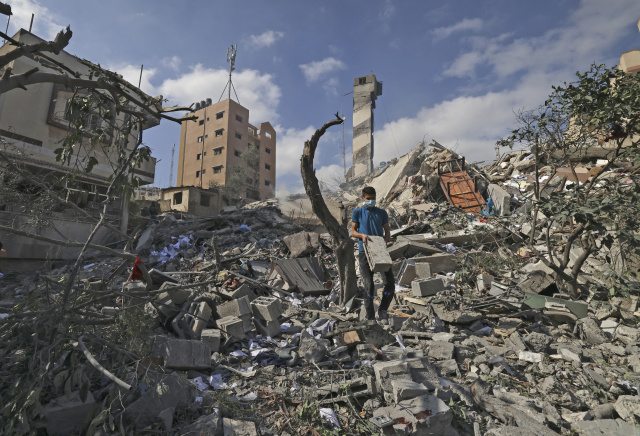 A Palestinian youth looks for salvageable items amid the rubbe of the Kuhail building which was destroyed in an early morning Israeli airstrike on Gaza City on May 18, 2021. The building had a printshop and university accessories and books storage facility for educational institutes in Gaza as well as a mosque. The UN Security Council was due to hold an emergency meeting today amid a flurry of urgent diplomacy aimed at stemming Israel air strikes that have killed more than 200 Palestinians. (MAHMUD HAMS / AFP)

(AFP) - The UN Security Council was due to hold an emergency meeting Tuesday amid a flurry of urgent diplomacy aimed at stemming Israel air strikes that have killed more than 200 Palestinians.

A fireball accompanied by a plume of black smoke erupted over a Gaza building early Tuesday after the latest Israeli strike, an AFP journalist reported.

Despite growing calls for an end to the bombardment, Israeli Prime Minister Benjamin Netanyahu said late Monday that Israel would "continue striking at the terrorist targets".

Israel launched its air campaign on the Gaza Strip on May 10 after the enclave's rulers, the Islamist group Hamas, fired rockets in response to unrest in Israeli-annexed east Jerusalem.

In total, Israeli air strikes have killed 212 Palestinians, including 61 children, in Gaza -- whilst rockets fired by Palestinian armed groups have killed 10 people in Israel, including a child, according to officials on both sides.

The Security Council session scheduled for Tuesday is the fourth since the conflict escalated and was called after the United States, a key Israel ally, blocked adoption of a joint statement calling for a halt to the violence on Monday for the third time in a week.

US President Joe Biden, having resisted joining other world leaders and much of his own Democratic party in calling for an immediate end to hostilities, told Netanyahu Monday night he backs a ceasefire, but stopped short of demanding a truce.

The Israeli army said Tuesday it had struck 65 "targets" inside Gaza overnight, while Palestinian militants had fired 70 rockets, dozens of which were intercepted by air defences.

Late Monday, strikes had knocked out Gaza's only Covid-19 testing laboratory and damaged the office of the Qatari Red Crescent.

The rate of positive coronavirus tests in Gaza has been among the highest in the world, at 28 percent.

Hospitals in the poverty-stricken territory, which has been under Israeli blockade for almost 15 years, have been overwhelmed by patients.

"We have nothing to do but sit at home," she said. "Death could come at any moment -- the bombing is crazy and indiscriminate."

Israeli fire has cratered roads and battered crucial infrastructure, causing blackouts and prompting the electricity authority to warn Monday it only had enough fuel left to provide power for another two to three days.

The conflict risks precipitating a humanitarian disaster, with the UN saying nearly 40,000 Palestinians have been displaced and 2,500 have lost their homes.

Palestinian militants have fired around 3,350 rockets toward Israel in the heaviest exchange of fire in years.

Hamas has threatened more rocket strikes on Tel Aviv if bombing of residential areas does not stop.

Fighter jets hit what the Israeli military dubs the "metro", its term for Hamas's underground tunnels, which Israel has previously acknowledged run in part through civilian areas.

Rockets were also fired at Israel from Lebanon, where protests against Israel's Gaza campaign have been held in the border area.

The Israeli army said the six rockets did not reach its territory.

In the West Bank, occupied by Israel since 1967, Palestinian Authority president Mahmud Abbas urged Washington to act against "Israel's aggression", in a meeting with US envoy for Israeli and Palestinian affairs Hady Amr, the official Wafa news agency reported.

Even as Security Council ceasefire efforts have faltered and the US has been accused of obstructionism, mediation channels are being opened behind the scenes.

Biden's national security adviser Jake Sullivan said he had spoken to his Israeli counterpart and the Egyptian government -- a key intermediary -- on Monday, saying that Washington was engaged in "quiet, intensive diplomacy".

French and Egyptian presidents Emmanuel Macron and Abdel Fattah al-Sisi are pushing for a ceasefire deal and aim to get the backing of Jordan. Another channel has been opened, via the UN, with the help of Qatar and Egypt.

The conflict was sparked after clashes broke out at Jerusalem's flashpoint Al-Aqsa mosque compound -- one of Islam's holiest sites -- after Israeli forces moved in on worshippers on May 7.

This followed a crackdown against protests over planned evictions of Palestinians in the Sheikh Jarrah neighbourhood of east Jerusalem.

Israel is also trying to contain violence between Jews and Israeli Arabs, as well as unrest in the occupied West Bank, where Palestinian authorities say Israeli forces have killed 20 Palestinians since May 10.

Abbas's Fatah movement has called for a "day of anger" and a general strike on Tuesday, a call echoed in Arab and ethnically mixed towns inside Israel.

General » Be a reporter: Write and send your article » Subscribe for news alert
Tags: Israel, Palestinians