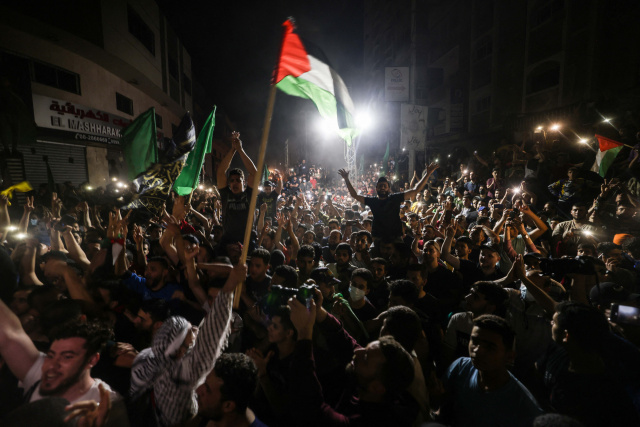 People take to the streets to celebrate following a ceasefire brokered by Egypt between Israel and the ruling Islamist movement Hamas in the Gaza Strip, in Gaza City early on May 21, 2021. A ceasefire between Israel and Hamas, the Islamist movement which controls the Gaza Strip, came into force early on May 21, 2021 after 11 days of deadly fighting that pounded the Palestinian enclave and forced countless Israelis to seek shelter from rockets. (MOHAMMED ABED / AFP)

(AFP) - A ceasefire between Israel and Hamas, the Islamist movement which controls the Gaza Strip, appeared to be holding Friday after 11 days of deadly fighting that pounded the Palestinian enclave and forced countless Israelis to seek shelter from rockets.

Gaza City was quiet under a cover of clouds, with only a thin column of smoke wafting into the skies after Israeli air strikes came to a halt, an AFP journalist reported.

Celebrations were heard in Gaza minutes after the truce began as cars honked their horns and guns were fired in the air, while in the occupied West Bank, joyful crowds also took to the streets.

With no alerts sounding in Israel to warn of incoming Hamas rockets, calm reigned across much of the Jewish state.

Residents on both sides voiced relief that a ceasefire had taken effect.

"It's a good decision to be honest with you because people from both sides are done with what's going on," said Amira Dana, a Palestinian resident of Jerusalem.

In Tel Aviv, Avital Fast said he wanted to be optimistic. "I really hope that it will remain because the only thing that we want here is to live our life without any alarms or fire."

"I believe we have a genuine opportunity to make progress and I'm committed to working toward it," said US President Joe Biden.

The European Union welcomed the ceasefire but insisted that working towards a "two-state solution" was the only viable option.

Russia and China also expressed satisfaction, but called for a return to peace talks.

Israeli Prime Minister Benjamin Netanyahu's office said the security cabinet had "unanimously accepted the recommendation of all of the security officials... to accept the Egyptian initiative for a mutual ceasefire without pre-conditions".

"This is the euphoria of victory," said Khalil al-Hayya, a senior Hamas figure, in front of a crowd of thousands of Palestinians who had gathered in the streets to celebrate.

Israel said its air campaign had made "unprecedented" achievements in Gaza, a territory it has blockaded since 2007, the year of Hamas's takeover.

"The political leadership emphasises that it is the reality on the ground that will determine the future of the operation," it added.

US Secretary of State Antony Blinken "will meet with Israeli, Palestinian and regional counterparts in the coming days to discuss recovery efforts and working together to build better futures for Israelis and Palestinians," said State Department spokesman Ned Price.

Fighting erupted on May 10 after weeks of tensions in Jerusalem, notably over planned evictions of Palestinians from their homes in east Jerusalem to make way for Jewish settlers, and clashes at the sensitive Al-Aqsa mosque compound.

The Israeli army said Gaza Islamists fired more than 4,300 rockets towards Israel, but that the overwhelming majority of those headed for populated areas were intercepted by its air defences.

The rockets claimed 12 lives in Israel, including one child, a teenager and an Israeli soldier, with one Indian and two Thais among those killed, the police say. Some 335 people in Israel were wounded.

Gaza emergency workers on Friday recovered five bodies and rescued around 10 survivors from the rubble of what appeared to be a tunnel hit by Israeli bombardment, officials said.

With the recovery of the bodies, Israeli air strikes killed 243 people including 66 children, according to health ministry figures. Hamas has said that among those killed were fighters.

Vast areas have been reduced to rubble and some 120,000 people have been displaced, according to Hamas authorities.

Diplomatic sources told AFP in Cairo that "two Egyptian delegations will be dispatched to Tel Aviv and the Palestinian territories to monitor its (the ceasefire) implementation and procedures to maintain stable conditions permanently."

UN chief Antonio Guterres, who also welcomed the deal, said Israel and the Palestinians now had a responsibility to have "a serious dialogue to address the root causes of the conflict."

He also called on the international community to work with the UN on a "robust package of support for a swift, sustainable reconstruction and recovery".

Shortly after the truce was announced, Islamic Jihad boasted it had "managed to humiliate" Israel.

It also vowed to remain the defender of Palestinians in Jerusalem, holy to both Muslims and Jews.

The Gaza militants' Lebanese ally Hezbollah, which itself fought a devastating war with Israel in 2006, congratulated the Palestinians on a "historic victory".

Israel's bombardment of what it describes as military targets in Gaza began after clashes between Israeli police and Palestinian protesters at the Al-Aqsa mosque compound.

Hamas had given Israeli forces until 6:00 pm on May 10 to leave the compound, one of Islam's holiest places and possibly the world's most sensitive religious site.

The Israeli army said it hit hundreds of military targets in Gaza and killed dozens of militant commanders.

Israel says it takes all steps to avoid civilian casualties, including by phoning residents to warn them of imminent strikes, and blames Hamas for placing weapons and military sites in densely populated areas.

The unrest also sharply heightened tensions and sparked violence between Jews and Arab-Israelis, while Palestinian protesters in the West Bank and east Jerusalem have repeatedly clashed with security forces.

General » Be a reporter: Write and send your article » Subscribe for news alert
Tags: Israel, Palestinians