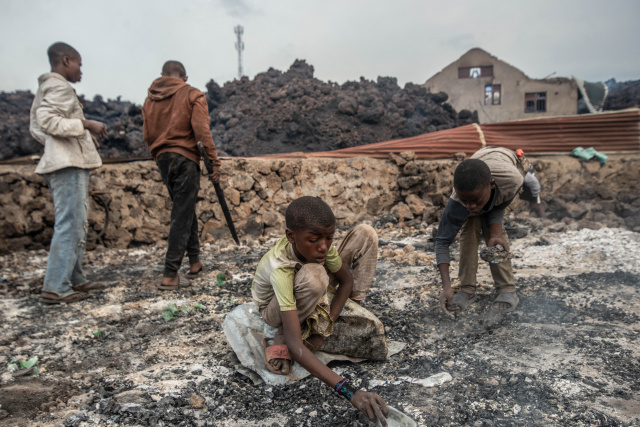 Children play with lava from Mount Nyiragongo on May 23, 2021 in Goma. A river of boiling lava came to a halt on the outskirts of Goma Sunday, sparing the city in eastern DR Congo from disaster after the nighttime eruption of Mount Nyiragongo sent thousands of terrified residents fleeing in panic.
Fire and strong fumes emanated from the blackish molten rock as it swallowed up houses, heading towards Goma airport on the shores of Lake Kivu.(Moses Sawasawa / AFP)

(AFP) - A river of red-hot lava stopped Sunday on the edge of Goma, sparing the eastern DR Congo city from disaster after an overnight eruption of the Nyiragongo volcano sent thousands of terrified residents fleeing in panic.

Fire and fumes rose from the blackish molten rock as it swallowed up houses, flowing towards Goma airport on the shores of Lake Kivu and leaving smouldering wreckage in its wake, an AFP correspondent said.

Residents began to warily return home despite repeated seismic shocks as the death toll rose to 15, most of whom were not killed directly by the eruption.

The military governor of North Kivu province said "the city was spared" by a matter of a few hundred metres (yards) after "the lava halted near Buhene on the outskirts of Goma".

Nine people nonetheless died in accidents during the evacuations, said General Constant Ndima, who was appointed governor this month when the province was placed under a "state of siege" to combat violence by armed groups.

UNICEF said however that at least five deaths had been directly related to the eruption, and that "more than 170 children are feared to be missing".

More than 150 other children have been separated from their families, the UN children's agency added.

Many families spent Saturday night sleeping on pavements surrounded by their belongings under a night sky turned red by the eruption of Africa's most active volcano.

"They lost everything... hundreds of people," one resident said.

After around a dozen tremors on Sunday, hundreds were preparing to spend a second night in the streets -- apparently without humanitarian aid, though Muyaya told a press conference that a government delegation was expected to arrive late in the evening.

"The most important thing now is to provide aid to displaced populations," he added, noting that President Felix Tshisekedi had cut short a European tour and was heading back to Kinshasa.

Tshisekedi said earlier that he would "supervise the coordination of aid".

Pope Francis offered a special prayer for Goma during his weekly prayer at the Vatican on Sunday.

"All the Goma residents returned home without incident this morning after spending the night in emergency shelters which Rwanda set up, mainly schools," said Rwanda's minister for emergency management, Marie Solange Kayisire.

She spoke to AFP from the town of Rubavu near the border.

"There is a smell of sulphur. In the distance you can see giant flames coming out of the mountain," one resident, Carine Mbala, told AFP.

Tourists who were near the crater when the volcano erupted are safe, the Congolese Institute for the Conservation of Nature (ICCN) tweeted, adding that rare mountain gorillas in the Virunga National Park, where Mount Nyiragongo is located, were not threatened either.

General Ndima had said MONUSCO, the UN mission in the country, along with NGOs and international organisations in the DRC, would hold an emergency meeting Sunday with local and regional authorities.

People had begun fleeing Goma city even before official confirmation that Nyiragongo had erupted at around 7:00 pm Saturday.

Power was cut in large parts of the city as the exodus began.

Tens of thousands of people, many carrying mattresses, food and parcels, streamed towards the Rwandan border, while others headed west towards Sake in the neighbouring Masisi region.

"The volcano devastated all our homes and all our possessions. That's why I'm scared again this time," he said.

On Sunday, fresh tremors "created a psychosis among the population," a witness said. "They are major shocks, even the well-built houses moved."

In a May 10 report, the Goma Vulcanology Observatory warned of increased seismic activity around the volcano, one of six in the region.

Nyiragongo last erupted on January 17, 2002, killing more than 100 people and covering almost all of the eastern part of Goma with lava, including half of the airport's landing strip.

During that eruption, the victims were mostly sick or elderly people abandoned to their fate in the northern districts of the city.

A UN source quoted a specialist as saying that the latest eruption was "exactly the same as the one in 2002" when fissures drained the volcano's lava lake without advance warning.

It has not been monitored for the past seven months because of a lack of funding, according to the head of the local vulcanology observatory.

General » Be a reporter: Write and send your article » Subscribe for news alert
Tags: DRCongo, volcano