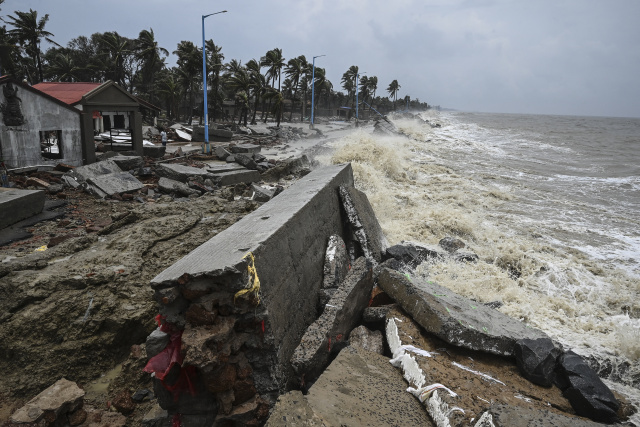 A man takes pictures as waves lash over onto a damaged shoreline after Cyclone Yaas hit India's eastern coast in the Bay of Bengal, at a beach in Shankarpur, some 180 km from Kolkata on May 27, 2021. (Dibyangshu SARKAR / AFP)

Cyclones are a regular menace in the northern Indian Ocean but many scientists say they are becoming more frequent and severe as climate change warms sea temperatures.

Barely a week after Cyclone Tauktae claimed at least 155 lives in western India, Cyclone Yaas forced the evacuation of more than 1.5 million people in the eastern states of West Bengal and Odisha.

The storm hit on Wednesday with torrential rain and howling winds gusting up to 155 kilometres (96 miles) an hour, equivalent to a category two hurricane.

Waves the size of double-decker buses pounded the shore and swamped towns and villages along the coastline, exacerbated by a higher-than-normal tide because of a full moon.

Prabir Maity, a resident of a village close to the sea, told AFP: "I have lost my home, everything."

In southern areas of Bangladesh, although not in Yaas's direct path, the sea smashed through water defences and inundated thousands of homes, officials said.

"The water level in the sea and rivers started to swell to over three to four metres (nine to 12 feet) above the normal level and breached embankments in 135 places," Banerjee said.

"Thousands of people are still marooned. We have set up 14,000 cyclone centres to provide shelter to the homeless," she said.

West Bengal disaster management minister Javed Ahmed Khan told AFP that rescue efforts were being "complicated" by villagers refusing to leave their homes because of fears about coronavirus.

"Water is everywhere. The situation is very grim," Arjun Manna, a resident of Kakdwip in the Sunderbans delta and nature reserve area, told AFP by phone.

"The devastation is huge. Most hotels and markets are still inundated. The sea is still roaring," Diprodas Chatterjee from the Hoteliers' Association in the seaside town of Digha told AFP.

"Employees who stayed back are telling a grim story," he said.

"At least five deer and a wild boar were rescued by forest officials," he said. "We are afraid that many crocodiles have left the breeding centre."

Some thatched homes were also damaged during the storm, but telecommunication networks were not affected, he added.

Yaas has since moved inland towards the state of Jharkhand, easing to a deep depression but bringing heavy rains.