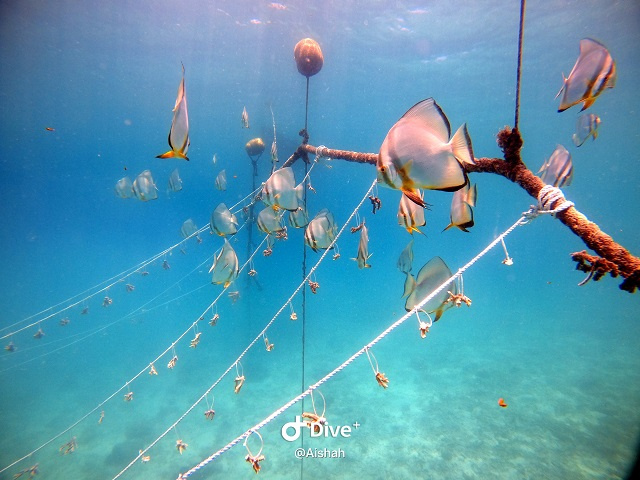 Around 400 coral fragments have been placed in the nursery so far. (Aishah Fanchette)

(Seychelles News Agency) - One of Seychelles’ largest coral nurseries is now growing corals after undergoing several months of restoration, and the project is expected to restore a combined 0.5 hectares of coral reef habitat by the end of the project.

The nursery in the Curieuse Marine Park was funded by the Adaptation Fund in October 2018 and is expected to be implemented over six years. The $10 million project is to benefit Mauritius and Seychelles through coral restoration activities as well as capacity building programmes and knowledge exchange for the region.

The scientific diver involved with the project, Aishah Fanchette, told SNA that the work undertaken included the removal of tangled and old ropes which have been replaced with new ones.

“Most of the corals located on the nursery were pretty big, but they were covered with predator bites. Therefore, we all decided to re-fragment these corals and reinstall them on the replaced ropes,” explained Fanchette, adding that “a few broken corals have also been spotted all along with the nursery site, they were also used.”

Fanchette added that “in the past two weeks, around 400 coral fragments have been placed in the nursery so far. The nursery is being cleaned twice a week and monitoring to check their survivorship is done every two weeks.”

“We completed one nursery, and are currently working on the second one,” said the scientific diver. The renovated nursery is already attracting more marine fauna to the area and these include batfish, trevally, puffer and octopus.

The ‘Restoring Marine Ecosystem Services by Rehabilitating Coral Reefs to Meet a Changing Climate Future’ project being is being implemented by the Seychelles National Parks Authority.

Terence Mahoune -  a field team leader from the authority -- said the grown corals are expected to be used as reef rehabilitation in the surrounding waters of Curieuse Island by the project team.

Curieuse Island is located off the north coast of Praslin – the second-most populated island of Seychelles, an archipelago of 115 islands in the western Indian Ocean. The small granitic island is a national and marine park managed by the Seychelles National Parks Authority.

The overall objective of the project is to reduce the impact of climate change on local communities and coral reef-dependent economic sectors in Mauritius and Seychelles by implementing coral reef restoration with thermal tolerant corals as an adaptation to climate change.

For Seychelles, the expected outcomes of the project include the establishment of coral farming and nur