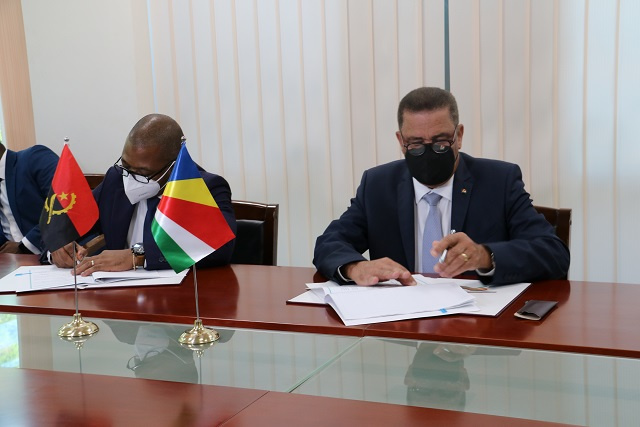 The agreements were signed by Minister Radegonde (right) and the newly accredited Angolan ambassador to Seychelles, Sandro de Oliveira. (Ministry of Foreign Affairs and Tourism)

(Seychelles News Agency) - Seychelles and Angola will have more cooperation in tourism, agriculture, education and several other fields after the two countries signed their first bilateral agreements on Tuesday.

The General Cooperation Agreement and the Agreement on the Creation of a Bilateral Commission were signed by Seychelles' Minister of Foreign Affairs, Sylvestre Radegonde, and newly accredited Angolan ambassador to the island nation, Sandro de Oliveira.

The General Cooperation Agreement provides a framework for bilateral cooperation between the two countries and indicates in which sectors and areas.

A bilateral joint commission will be established and will be responsible to discuss and monitor the implementations of specific cooperation between the two countries.

"One area that the ambassador has shown huge interest in is that Angola would like to learn from Seychelles in the domain of entrepreneurship, especially how Seychelles encourages youth to kickstart their small businesses," said the Principal Secretary for Foreign Affairs, Vivianne Fock Tave.

Seychelles, an archipelago in the western Indian Ocean, and Angola established diplomatic relations on November 7, 1986. Not much has happened between the two countries on a bilateral level, although Seychelles and Angola share common interests and visions in various matters of regional and international scope. Both countries maintain excellent cooperation in the multilateral field particularly in the sphere of the Southern African Development Community (SADC) and the African Union (AU).

Through his translator, the ambassador, who presented his credentials to President Wavel Ramkalawan at State House earlier in the morning, said that "the moment is now ideal for us to give a new dynamic to the bilateral relations."

"We want to take maximum advantage of the opportunities that exist in the two economies in various domains in the pursuit of reciprocal advantages that will support the development of our countries and the fulfilment of the wishes of our population. Effective cooperation can only be achieved when there exists a legal and institutional framework," said de Oliveira.

"The implementation of these two important instruments will accelerate the exploration of areas for the mutually beneficial cooperation and the materialisation of joint projects, aimed at the sustainable development of our respective economies and the well-being of our population," he continued.

On his side, Radegonde outlined that "the agreement underpins our wills and efforts to expand bilateral cooperation in several key areas."

He said that these agreements are not just legal frameworks defining broad terms and modalities of potential areas of cooperation.

"They will serve in ensuring and guiding the existing relations of our future exchanges, reflect the high level of trust between our two states and the spirit of genuine strategic partnership between Angola and Seychelles that characterises our bilateral relations. They will provide for the agencies concerned to undertake direct dialogue and consultations regarding the main cooperation aspects of our decades-long relations," he added.