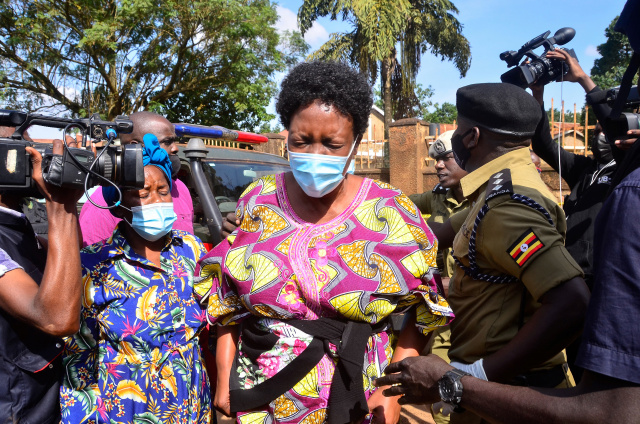 General Edward Katumba Wamala, who was chief of the defence forces between 2013 and 2017, came under fire while driving in capital Kampala, government spokesman Chris Baryomunsi said.

"There was an attempt on his (Wamala's) life this morning... His daughter and bodyguard were shot and they died at the scene," Baryomunsi told AFP Tuesday.

"General Katumba has been rushed to hospital with bullet wounds and he is receiving treatment, the crime scene has been taken over by the investigators," he added.

"This could be a case of assassination by criminal elements but the investigations will establish the motive and those behind" the attack.

"Armed assailants on two motorbikes trailed and shot at the vehicle of General Edward Katumba Wamala," he said in a statement.

In a video addressed to his children seen by AFP, Wamala spoke out about the attempt on his life, saying he had only been wounded in his arms.

"I've survived. We have lost Brenda. That's God's plan. I love you guys. Please pray for Mummy. Mummy's in a terrible, terrible state, please pray for her," he said.

President Yoweri Museveni slammed the attackers as "pigs who do not value life" in a statement posted to Twitter.

"I talked to Gen. Katumba twice on the phone. He is being well-managed," he said, adding "we already have clues to those killers".

Museveni said the bodyguard had fired a warning shot which had saved the general's life, but should have "shot to kill".

"We could be having a dead terrorist instead of scaring away the terrorists."

Images from the scene showed about a dozen bullet holes riddling the rear and driver side of Wamala's car -- an official army vehicle easily identified by its distinctive military green number plates.

Tuesday's shooting is the latest in a series of attempted killings of high-profile targets by motorcycle-riding assassins in Uganda's capital.

In June 2018 Ibrahim Abiriga, a leading politician from Museveni's National Resistance Movement party, was gunned down alongside his bodyguard in similar circumstances.

In March 2017 witnesses described how Uganda police spokesman Andrew Kaweesi was killed in a hail of bullets, also by four masked assailants riding two motorcycles and near the site of the latest attack on Wamala.

And in March 2015, Joan Kagezi, a prosecutor in charge of investigating a jihadist attack in Kampala in 2010, was shot dead by men on motorbikes as she returned home.

No one has been convicted of any of those killings.

Museveni said a new system of "digital beacons" on all vehicles and motorcycles would stop them from being used in crimes.

General » Be a reporter: Write and send your article » Subscribe for news alert
Tags: Uganda, politics