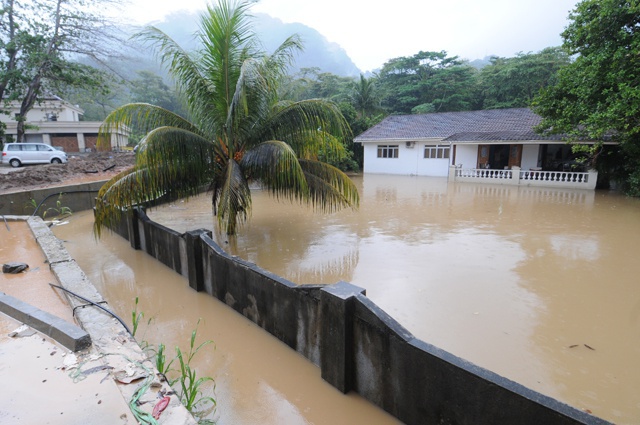 Flooding at the Beau Vallon area in the northern part of the Seychelles main island of Mahe following heavy rainfall in February. (Joena Bonnelame, Seychelles Nation)

(Seychelles News Agency) - Seychelles has become the first African country to partner with the World Bank in preparing for natural disasters. According to a press statement from the World Bank, its Executive Board of Directors last week approved a $7 million line of credit that would enable the Indian Ocean island nation to gain immediate access to emergency funds in the event of a natural or man-made disaster.

The Disaster Risk Management Development Policy Loan (DPL) with Catastrophe Deferred Draw-Down Option (Cat DDO) will serve as a contingency fund that Seychelles would be able to “draw down” in the immediate aftermath of a disaster which has been declared as a national emergency.

As a small island developing state (SIDS), Seychelles is particularly at risk to the unpredictable effects of climate change, including severe weather, flooding, mudslides and tsunamis. The 2013 floods brought about by Cyclone Felleng cost the country $8.4 million alone.

The government of Seychelles and the World Bank’s Africa Disaster Risk Management team subsequently conducted a Damages, Losses and Needs Assessment (DALA) funded by the Global Facility for Disaster Reduction and Recovery (GFDRR).

Seychelles will now be able to use the insights from this assessment as well as funding received from various grants and external loans to better safeguard its population of 90,000 and build institutional and legal frameworks in preparation against disasters.

Immediate liquidity when needed most

“The reason the Cat DDO is so significant is because it provides immediate liquidity when medium-sized or cumulative disasters hit Seychelles,” said Pierre Laporte, the Minister of Finance, Trade and Investment for Seychelles. “As a result, we can avoid diverting the funds originally set aside for development projects attending to the needs of our country's poorest.”

The World Bank’s Vice President for Africa, Makhtar Diop, said the first-of-its-kind agreement was an important step forward for disaster risk management in the region, and he is hopeful that more African countries will follow suit.

“This operation will allow the government of Seychelles to concentrate on strengthening its methods to ‘build back better’ in the aftermath of natural disasters while also protecting its people against the effects of natural disasters and making their development gains and plans more disaster resilient.”

In addition to the Cat-DDO facility the World Bank also approved the third and final Seychelles Sustainability and Development Competitiveness Loan to support the government in its economic reform programmes.

The new loan, which, like its predecessors equals an amount of US$7 million, will continue to shore up economic resilience in Seychelles by promoting improvements in the business climate, enhancing fiscal transparency, improving public financial management and increasing fiscal oversight and controls of state-owned enterprises.

“This is the third and final operation of a programmatic series and we are happy to see the progress Seychelles has made implementing its economic restructuring program,” said the World Bank’s Task Team leader for the loan, Rafael Munoz Moreno. “It has produced strong fiscal discipline and improved economic resilience and competitiveness.”

According to the Director of Public Debt in the Ministry of Finance, Trade and Investment, Brian Charlette, the Cat DDO facility is a line of credit that may never have to be used.

This means that the $7 million amount will not be added to the Seychelles’ debt stock unless the money is drawn down from the bank in the event of a disaster.

“The amounts that are disbursed will be added to our debt stock,” he told SNA. “So if the whole $7 million is required in one go, the debt stock will increase by $7 million.”

Seychelles underwent an IMF- assisted economic reform programme after the country’s 2008 debt crisis when total debt had reached 131 percent of GDP and external debt was 83 percent of GDP. The target is for the debt-to-GDP ratio to be decreased to 50 percent by 2018.

It looks as though the finance ministry is well on track in its goal, with Charlette confirming that the debt-to-GDP ratio has declined to 63 percent – 33 percent external debt and 30 percent domestic debt – as at the end of August 2014 compared to 77.5 percent of GDP in 2012.