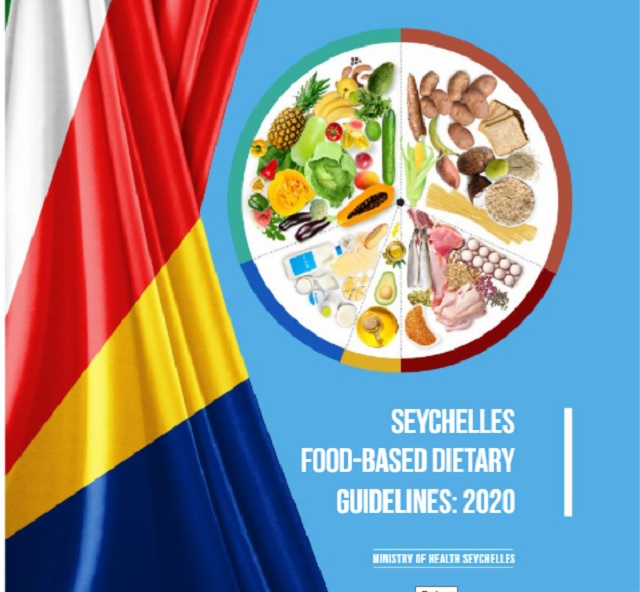 The guidelines, released two weeks ago by the Ministry of Health, are an update on the island nation's original guidelines released in 2007.

"It is hoped that the new guidelines will help to sensitise and raise awareness about the importance of eating varied, nutrient-dense local foods like tubers, fruits and vegetable instead of consuming ultra-processed foods with sugar and salt, which attract consumers as they are affordable and readily available in shops," said the ministry's principal nutritionist, Stephanie Desnousse.

Seychelles has a high prevalence of obesity and chronic diseases, and Desnousse said this is observed among all age groups. A 2013 heart study found an increased prevalence of combined overweight and obesity in men from 28 percent to 57 percent and in women from 51 percent to 72 percent compared to 1989.

The dietary guidelines target the general population with 10 general messages about healthy eating and the types of food recommended for them daily and nutritional values of food per 100 grammes.

It also has separate guidelines for children from 0 to 5 years, as well as pregnant and lactating women.

"We felt that this was important as there is a need for further education in those critical life stages in ensuring that young children get the best start in life," explains Desnousse.

The process for revising the guidelines started in 2017 and involved the participation of professionals from the health, education, agriculture, and fisheries sector who were tasked with scrutinising the previous guidelines, reviewing existing literature for emerging evidence in the field and review current guidelines from other countries globally.  The review was done with the financial support of the Food and Agriculture Organisation (FAO).

For the general population above 5 years, the guidelines encourage regular consumption of fish including oily fish like fresh tuna, bonito and mackerel for a healthy brain, as well as eating whole grains and local tubers instead of rice for a healthy heart.

One of the guidelines for infants and young children from 0-5, encourages mothers to feed their babies only breastmilk for the first six months of life as it contains all the food and water the baby needs. It also advises that although a variety of food from the five nutritional groups are introduced at six months, mothers should continue to breastfeed up to 2 years.

For pregnant and lactating women, the dietary guidelines include eating different coloured fruits, vegetables and pulses like beans, lentils and peas, every day to keep their digestive system healthy and to consume milk and milk products every day for stronger bones and teeth.

Health » Be a reporter: Write and send your article » Subscribe for news alert
Tags: dietary guidelines, Food and Agriculture Organisation