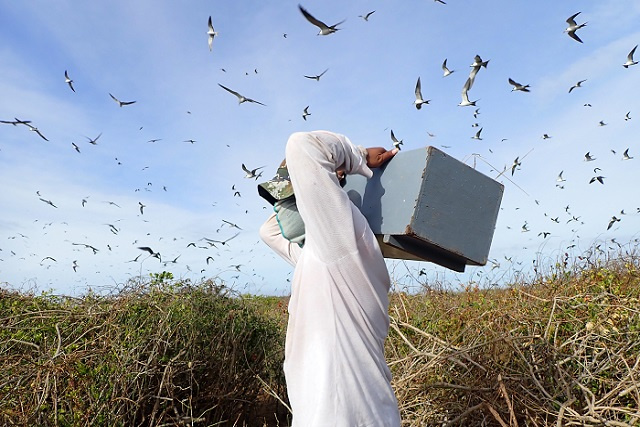 The census which will be conducted throughout the month of June also aims at establishing the level of egg harvesting in Seychelles. (Islands Development Company)

(Seychelles News Agency) - The environment ministry of Seychelles this month started a national census of the sooty tern and also closed the egg collection season in order to determine the bird's population, size and distribution of colonies in Seychelles.

Found throughout the world’s tropical seas, and as the most abundant seabird in Seychelles, the eggs of this species are a traditional food delicacy and have been harvested in large numbers across many of the islands.

The census which will be conducted throughout the month of June also aims at establishing the level of egg harvesting in Seychelles, an archipelago in the western Indian Ocean.

To support the implementation of the census and ensure that correct information is collected, the Ministry has declared 2021 as a closed season for birds’ eggs collection, effective as of June 1.

The senior legal officer at the Ministry, Sharon Gerry, told a press conference on Wednesday that amendments have been made in the regulation of the collection of sooty tern eggs on islands where collections are authorised.

Members of the public are advised that due to the closed season, there will be no allowable collections of eggs on any of the islands of the Seychelles until May 31, 2022.

“From last year until May this year, eggs could be collected, so there will be a certain amount on sale. However, once we have proof that there are poaching happening, under the Animal and Birds’ Protection Act, there are provisions that sanctions these people. There is a fine between SCR5,000 ($309) and SCR500,000 ($31,000) that a person can be charged with if they are caught poaching or have proof indicating the same,” said Gerry.

The Principal Secretary for Environment, Denis Matatiken, said that information gathered will help the Ministry of Agriculture, Climate Change and Environment to better guide policy and decision making for future management of the species.

“We humans are frequently collecting these eggs. At the moment, we do not know what is happening to the population. Each egg we collect accounts for one less bird in the population. A lot of emphasis are placed globally on the impact of climate change and we do not know what impact this is having on these birds. And how it is affecting food sources for the bird,” said Matatiken.

He also outlined that in the past there are certain islands where there was a presence of a colony and over time, they have disappeared and “certain researches and counts carried out on some of these islands indicate that there is a reduction in the number of birds.”

The census will be carried out by the Ministry in partnership with Islands Development Company (IDC), Island Conservation Society and Bird Island management. It will be done on all the islands where there are known nesting colonies of sooty terns. These will include the Cosmoledo, Desnoeufs, Bird, Aride, Recif, Farquhar, Etoile, Boudeuse and African Banks

“Some of the islands are quite isolated and some are far away and this is where the partners come in. IDC is helping us to get to the islands and they are also helping us with accommodation and transportation,” said Matatiken.

IDC and Birds Island management are the two entities mandated with sooty tern egg collection and sale in Seychelles.

Species » Be a reporter: Write and send your article » Subscribe for news alert
Tags: Animal and Birds’ Protection Act