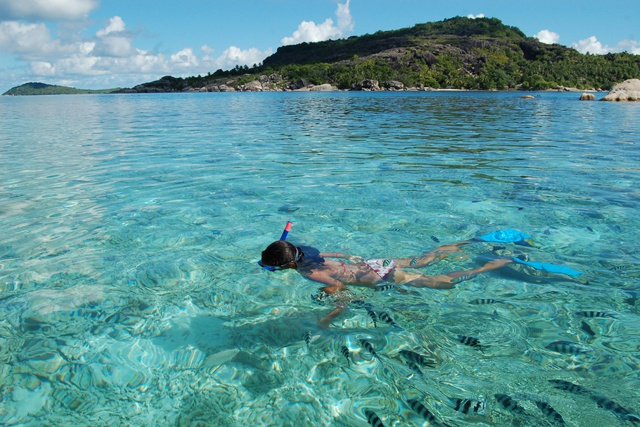 (Seychelles News Agency) - World Oceans Day, commemorated on June 8, is used to raise awareness about the ocean, which covers over 70 percent of the planet, and its utmost importance to life on earth. It is our life source, supporting humanity's sustenance and that of every other organism on earth.

The ocean produces at least 50 percent of the planet's oxygen, is home to most of the earth's biodiversity, and is the main source of protein for more than a billion people around the world. The ocean is also key to our economy with an estimated 40 million people being employed by ocean-based industries by 2030.

Here are four steps taken by Seychelles – 115 islands in the western Indian Ocean - to protect its ocean for life and livelihood.

In March 2020, Seychelles legally designated 30 percent of its territorial waters as marine protected areas 10 years ahead of international targets.

With this historic marine designation, the island nation tripled the goal in line with the UN Convention of Biological Diversity Target 11 and the UN Sustainable Development Goal SDG-14, both which call for 10 percent marine protection by 2030.

In recent years, a lot of emphasis has been put on marine waste and its catastrophic impact on marine life and the ocean. These initiatives were mostly by not-for-profit groups and youth groups with the support of the government.

One such initiative was by the Ocean Project Seychelles in partnership with the Islands Development Company were environmental volunteers collected over 10 tonnes of waste that washed ashore on eight remote islands of Seychelles in the first-ever large-scale clean-up of the Indian Ocean nation's outer isles, an effort that showed that large portions of the trash emanated from foreign countries.

Another major cleanup was one conducted on the World UNESCO site the Aldabra Atoll, where 25 tonnes of waste -- including some 50,000 flip-flops -- were collected in a five-week clean-up on the remote atoll.

The clean-up project aimed at clearing the island of man-made rubbish, while also quantifying the amount and types of plastic and finding a sustainable way to process it.

Many efforts have been put into coral restorations following major coral bleaching incidences in Seychelles' waters. The first bleaching catastrophe happened in 1998 when up to 97 percent of corals in some areas bleached and caused many reefs around the islands to collapse into rubble.

To date projects around restoration are being done both on land and in the sea. Currently, the Curieuse Marine Park is being used for several coral restoration projects including a nursery where corals are grown.

Restorations are also being done on the reef surrounding Aldabra. Whilst on the main island of Mahe, in the south the Anse Forbans Community and the Fishermen's Cove Hotel in the north, are also growing corals in their land coral nurseries.

A ban on the importation of balloons by both businesses and individuals into Seychelles took effect on April 1 this year. However, the restriction on the use, distribution and sale of balloons has been postponed from June 1st to September 1st. The ban on balloons is another step by the island nation to protect its beaches and ocean from litter.

Last year, two not-for-profit organisations initiated a petition to the Ministry of Environment to take concrete action to get balloons banned on beaches in Seychelles.

The petition also called on all members of the public to support this important cause "to protect our beautiful ocean and its marine life so that they may be enjoyed by the Seychellois people and our visitors for generations to come."