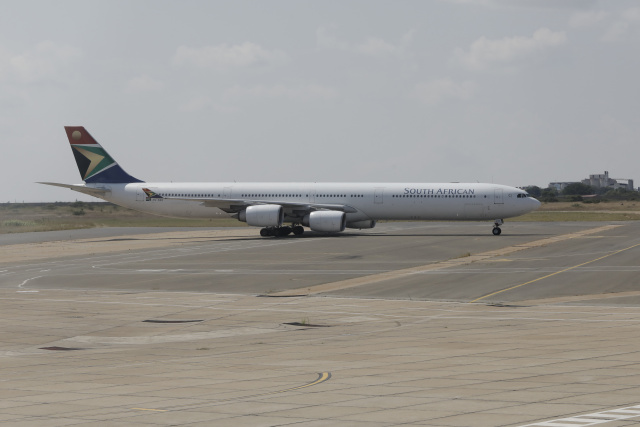 A picture taken on March 14, 2020 shows a South African Airways Airbus A340-600 plane as it arrives in Polokwane, in Limpopo province, carrying South African citizens who have been repatriated from Wuhan, China, where they were working when the novel coronavirus (COVID-19) erupted. At least 120 South Africans working and studying in Wuhan have pleaded to be repatriated after spending nearly two months there in lockdown. (GUILLEM SARTORIO / AFP)

(AFP) - South Africa's government announced Friday it would sell a majority stake in cash-strapped flag carrier SAA to a consortium that includes the operator of a local budget airline.

The airline, which is emerging from a rescue plan, will effectively be privatised as investors will hold a majority stake.

"Having evaluated the current environment, government has agreed to the (strategic equity partner) owning of 51 percent of the shareholding and government 49 percent," Public Enterprises Minister Pravin Gordhan said in an online media conference.

"With this partnership, we believe we are closer to achieving the important objective of having a sustainable national airline," he added.

"The new SAA will not be dependent on " the government.

SAA, one of the continent's largest airlines, was placed under a state-approved rescue plan in December 2019 in an effort to save it from collapse.

The airline, Africa's second largest after Ethiopian Airlines, had not posted a profit since 2011 and survived for years on state bailouts.

A symbol of the mismanagement of state-owned enterprises that characterised ex-president Jacob Zuma's reign, the airline was forced to abandon many routes even before the Covid-19 pandemic.

General » Be a reporter: Write and send your article » Subscribe for news alert
Tags: SAfrica, SAA