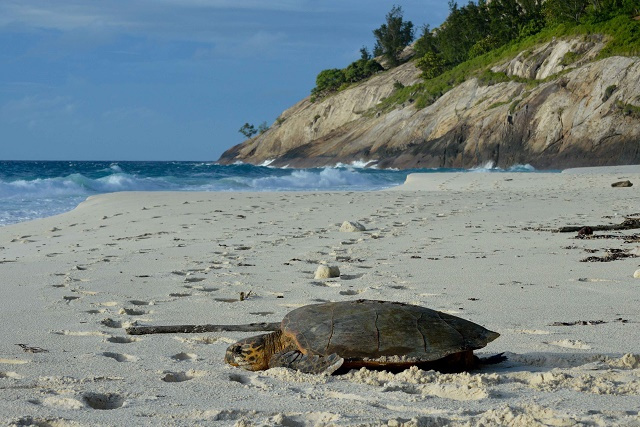 The green turtle nesting populations in the inner islands are on the verge of extinction. (North Island)

(Seychelles News Agency) - Since the Seychelles Islands Foundation (SIF) started monitoring green turtles' nesting in the early 1980s, there has been an almost 500 percent increase in the number coming ashore to lay eggs, an officer at the foundation said.

The green turtle is listed by the International Union for Conservation of Nature (IUCN) as endangered. Much reduced from their previous numbers, the green turtle nesting populations in the inner islands are on the verge of extinction.

Higher levels of nesting are occurring in the Amirantes Group, with the most important green turtle nesting populations being those of the southern islands, especially Aldabra, Assumption, Cosmoledo, Astove, and Farquhar atolls.

The Aldabra scientist Luke A'Bear told SNA that prior to the establishment of the Aldabra research station in 1971, turtles were being harvested for their meat and eggs almost continuously.

"In fact, one of the main reasons Aldabra was settled in the first place in the late 1800s was to exploit the abundant turtle population, as well as the giant land tortoises, fish and mangrove wood. One of the first leaseholders of the atoll, Mr James Spurs, intended to export 12,000 turtles a year," said A'Bear.

He outlined that by the time the research station was established it was very rare to see even one green turtle nesting on Settlement Beach, the largest beach on the atoll. The situation gradually started to change with the SIF sea turtle protection programme.

"Remember that until recently none of the ocean surrounding Aldabra was protected, so the turtle numbers have increased without the assistance of a large Marine Protected Area. Just by stopping harvesting on land, their numbers have skyrocketed. In March this year, we had on average nearly 50 turtles a night coming ashore to nest, with 88 turtles one night come up to the beach," said A'Bear.

During March, SIF rangers patrolled the beach in front of the research station every morning to count the number of tracks left by the nesting green turtles during the night.

The research team counted 1,516 tracks in March - an average of 50 turtles a night. The previous highest month was April 2019, with 1,377 tracks and an average of 45 turtles per night.

According to an article in the SIF newsletter recently released, the numbers really started to increase from 2000 onwards, increasing dramatically almost year on year since then.

"Green turtles usually take between 25 to 30 years to reach sexual maturity, so it could be that the increase in numbers from the year 2000 is those first-generation protected hatchlings returning to nests. With 50 years of protection, Aldabra is an example of the power of conservation and the resiliency of turtles and nature to recover if left undisturbed," said SIF.

Green turtles nest at night in Seychelles, an archipelago in the western Indian Ocean, and nesting is year-round, with hatching two months after eggs are laid.

Adult green turtles usually forage several hundred km from their nesting grounds and females tagged nesting on the beaches of Aldabra have been subsequently encountered along the east coast of Africa and Madagascar.